Two and a half weeks after the eruption of the Fuego Volcano. The central park of Alotenango is still set up for receiving and giving aid, but there are no longer huge crowds of people. The three yellow tents of Scientology are still standing in a corner, but unmanned. World Central Kitchen continues to prove thousands of meals a day to the people in the shelters, firemen and other volunteers. 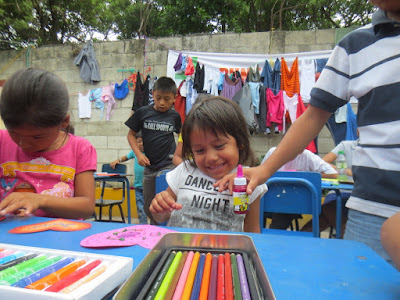 Two weeks ago I went with Abi Ruiz, the administrative assistant of the Carpentry Project in Alotenango and three of her friends to one of the shelters for an art workshop. The kids loved it and we were asked to come back. But last week we couldn’t get permission since access has been even more restricted after one of residents was arrested for sexual assault on an 11-year old girl. This week we were granted a mere hour, not much but better than nothing.
But upon arrival it turned out we were not on the list. And the kids were busy anyway, we were told. We had to go to the Municipality where staff and volunteers were trying to coordinate activities and help offered from a room that was filled up to the ceiling with classified donations. Initially we were told we couldn’t go into the shelter, but Abi happened to know the coordinator’s sister (the coordinator, by the way, was a different one from the one from last week who was a different one from the week before). Anyway, we got permission, got the required piece of paper and nametag. We even got two whole hours instead of one, although we lost half an hour getting the permission in the first place. 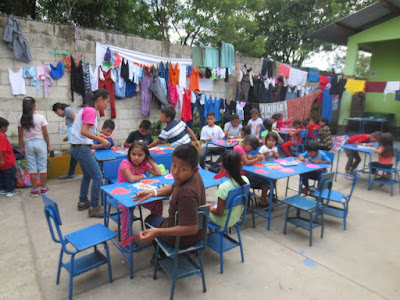 The shelter was visibly less busy than last time. There was also no activity at all going on for the kids, just some church thing for adults in one of the dorms/classrooms. The kids remembered us and were happy to see us. We made a “Chain of Love” that we put up for decoration. Colouring and drawing were also an option, as well as story telling. “Can you read the poop story again?” Yes, The Story of the Little Mole Who Knew It Was None of His Business is a popular one, as is The Grouchy Ladybug by Eric Carle. But I had brought many more books this time, thanks to Sarah Peller who lent us a whole box full of the good stuff. 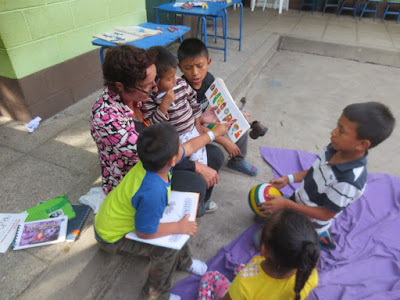 The approximately 35 kids had a good time and like last time, were very concentrated. We were disrupted only once by a young pair of tourists who asked if they could interrupt the activity to hand out some donations. I asked them if they could wait three minutes to finish my story, which they didn’t, so why bother asking at all. They handed out knock-off Croc sandals (but not enough for all the kids) and a few balls (there is no space to play ball in the shelter) and then hang around for a while to take photos and talk with/to the kids. They must feel really good about themselves now that they have helped those poor kids. 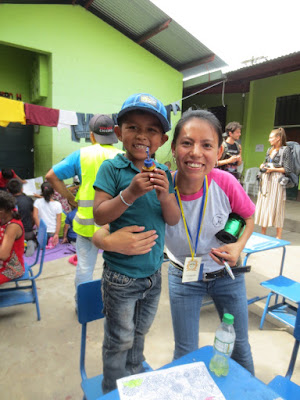 Anyway, with the kids we made plans for next week. We have permission already, that is, if they don’t change coordinators in the mean time. The shelter will probably open for another two weeks before people are moved to a more permanent temporary home. Until then we’ll continue weekly workshops, and most likely later on as well. In the meantime I’ll be checking out one of the shelters in Escuintla to set up a long term art workshop over there. 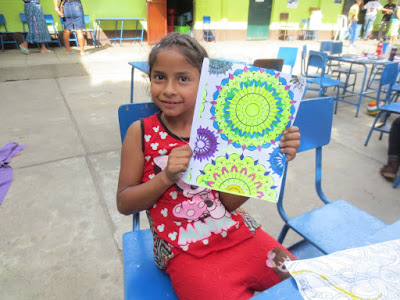 Many thanks to the people who have donated towards art supplies so far (Wendy Russell, Ineke de Smidt, Debbie Pate, Judy Sadlier, Maureen Mack, Will & Cees Griffieon and Colour4Kids). I haven’t done much of fund raising yet for an ongoing art program because the situation is still so unclear, but I hope to have more information soon. (But donations are welcome! Paypal (carinsteen@yahoo.com) or deposit on my Dutch bank account NL95 ABNA 0254 0313 74.

In the meantime, we’ll continue to bring some fun to the kids as much as we can! 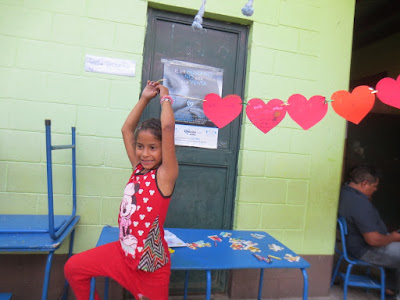