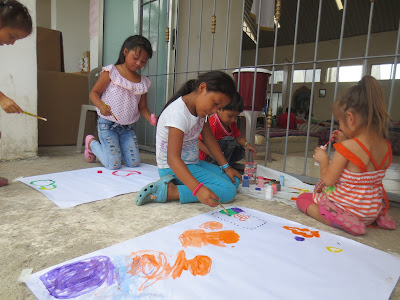 For the people living on the south flanks of the Fuego Volcano, Escuintla, the capital of the state with the same name, is the nearest  big city. So after the eruption on June 3rd, logically a lot of aid came from this direction and many of the wounded and displaced ended up in hospitals and shelters in Escuintla. Others ended up in the smaller town, right at the foot of the volcano of San Juan Alotenango, the municipality with the worst affected villages and hamlets. The two towns are no longer connected by Ruta Nacional 14 since it was (and still is) covered by lava and other debris. Reconstruction might take a while and will cost an estimated 230 millions of Quetzales (roughly 30 million US$). Just to get an idea, the Guatemala government made the amount of 192 million Quetzales available for disaster relief.
A group of national and international experts argue that the road shouldn’t be repaired at all because it will most definitely be destroyed again. A slight to moderate rain can cause 15 million cubic meters of volcanic material to slide down. With heavy rain, the expectation is up to 60 millions of volcanic debris.

Normally the trip to Escuintla takes about 45 minutes, but the only alternative route took us a full 2.5 hours. When we got out of the car a humid wave of heat welcomed us, a reminder that we made a steep descend from the mountainous area of Antigua. Here, at the outskirts of Escuintla, surrounded by sugar cane fields, we easily found the modern Catholic church building that now functions as a shelter for a few hundred people that lost everything during the eruption. 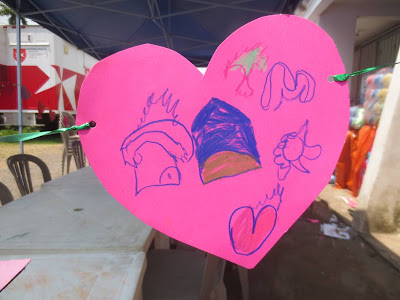 Although most shelters have been taken over by the Guatemalan government and are now run by the local municipality, with soldiers keeping people in and others out, this shelter remains firmly run by the church, no soldiers allowed. It seemed to be smoothly run. The access wasn’t as restricted the shelters in Alotenango. Although the gate was guarded, volunteers could go in and residents go out. World Central Kitchen has set up a cooking area where people can get their breakfast, lunch and dinner. A huge tent provides shade with a few dozens of tables and chairs where people can eat or just hang out. The main building of the spacious church now houses hundreds of people with their few belongings orderly stored on their mattresses or field beds. 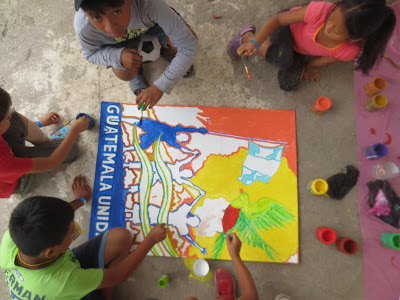 We were directed to the children’s area, divided in a space for young children (about 100) and one for adolescents ( about 50) where they are being entertained by psychologists of World Vision and other volunteers. One psychologist is in charge of coordinating all activities and the toys, books and art supplies. Despite our “appointment”, we were not expected, but were told we could do our activities anyway. For future references we were given a sheet with contact info and a set of very reasonable rules (1 hour activities maximum; keep the kids in the designated areas; make an appointment; keep the area clean and tidy; and only healthy snacks allowed, no candy or cake). 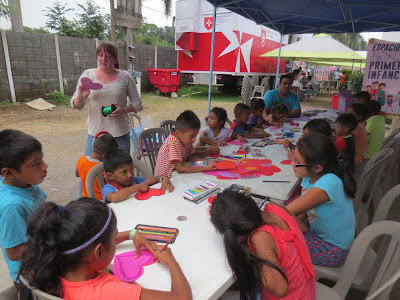 I set up a painting area (a mini-mural and free painting on big sheets) while Jessica Hoult prepared the art activity of the day (a “Chain of Love”) at the tables. José Carlos Barahona, who was so kind to drive us, set up a story telling corner. 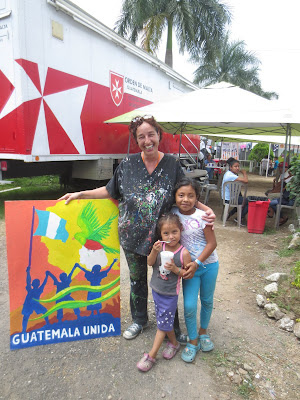 Despite everything being so organized, I had a lot more trouble keeping control over the kids and supplies than in Alotenango. There was one specific boy, maybe 3-4 years old, cute as can be, but he needed a LOT of attention and was driving me quite mad. So I was glad when he finally left for the other activity (Jessica told me later that everything went quite well until this small boy joined her group, driving her quite mad. Hah, it wasn’t just me!) Anyway, the painting was fun, even when the kids decided to start mixing colours. Not on the paper, but in the jars. So now I have about 20 jars of diarrhea coloured paint. The mini-mural turned out quite nice and the psychologist asked if she could keep it to put it up somewhere. (Yes, of course, that was the whole point.) 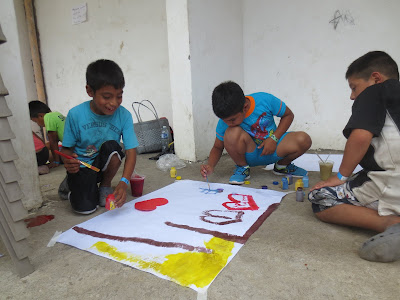 Jessica and José Carlos did fine, although Jessica did report that a girl came running up to the table, snatched a pack of markers and disappeared in the crowd. Well, that happens. Some crayons also disappeared into thin air, just collateral damage. So all in all, it was a good experience although on the way back we evaluated the situation and haven’t yet decided on how to continue. Those kids obviously had plenty of activities going on and for us to drive 4-5 hours a week for a one hour activity just doesn’t seem to be worth it. Or necessary, for that matter. So we’re looking into other shelters that might have more need for some distraction.
It’s still very difficult to evaluate the situation. The government is planning on building 250 temporary units in the next few weeks for about a 1000 families, on a government owned piece of property in Escuintla. It can take years before those families will actually have a chance to move into a new home, built either by the government or NGOs. I think that once the people are installed in the “temporary permanent” shelters, there might be more to be done for us, especially if the attention and aid will wind down with time. From previous experience (after hurricane Mitch) I know the value of art activities for kids and teenagers to express their anxieties, besides having some plain fun. I’m also thinking of activities that can create a sense of community (painting the temporary homes in individual designs?) or for example a carpentry workshop where people can learn and make their own furniture, according to their own need and taste. 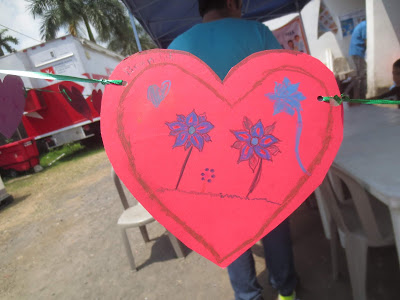 So for now, I’ll be going to Alotenango once a week and probably to Escuintla too. What the future will bring, we’ll see, but as long as I can contribute with my art, I’m determined to do so.

Thanks so much, everybody who has pitched in so far. If you want to contribute, now or in the future, please let me know! (PayPal: carinsteen @ yahoo.com/ Dutc bank account: NL95 ABNA 0254031374)
Posted by Carin Steen