Visitors to Guatemala often name the vibrant colours as one of the most striking features of this country. True, up to certain extent. The typical dress of Maya women; bougainvillea in a shade of pink that’s eye-blinding; tropical birds; a dozen shades of blue, purple and turquoise at Lake Atitlan… But for most Guatemalans it is the dull grey of cinder blocks that dominates their surroundings.

Barrio Vista Hermosa in Jocotenango is no different. This neighbourhood on the outskirts of Jocotenango is located next to a dumping ground. The neighbourhood is nicknamed El Papelillo (“Piece of Paper”) for the remains of paper and plastic that whirl around when the wind stirs up the garbage. Vista Hermosa (“Precious View”) it is, looking out over the valley, but that’s as far as beauty goes. Houses are built against a mountain slope without much thought for aesthetics or safety, just wherever there is an inch to spare. Poverty, drugs, lack of water and electricity, limited access to school or health facilities are the norm in this “typical” neighbourhood. Vista Hermosa is divided in territories run by gang members and drug traffickers. Up until recently you couldn’t just go anywhere nearby. Even the police wouldn’t enter the neighbourhood, unless in a massive operation. You couldn’t even cross the football field. That corner of the field was most definitely a red zone. Not the best of places to grow up in. But things are changing…

Yesterday I had the pleasure to go on a tour guided by Denilson Larios and Yorman Vega, two young men from this community who have decided to make a difference. Their initiative, Urban heART, aims to change the community through the arts. Yorman told me how he met Denilson when they were small kids with nowhere to play. They hung out with the bigger kids around the fountain on the main square. Most of those older guys had little to look forward to and were involved in drugs and delinquency. Denilson and Yorman might have followed the same path if they hadn’t enrolled in an afterschool project that offered creative courses. And that’s how Denilson became a mural painter and Yorman a break dancer.

In collaboration with Lead Up International and inspired by successful mural projects in Comuna 13 in Medellín, Colombia, Urban heART’s uses the arts (mural painting, paste-ups, break dancing etc.) to make a difference. And it is working! Already many depressing grey walls have turned into an explosion of colour with meaningful and positive messages. The football field looks much more cheerful these days. The pila, the public laundry area, has been cleaned, repaired, painted and provided with light and plants. The effects of Urban heART’s efforts are already visible: the grassy area in front of one of the murals used to be a dump. After a clean-up campaign organised by Urban heART, the grass is still, surprisingly, neat and clean. During our tour we spotted a small mural high up a wall. Denilson told us it was recently painted by a kid that lives in the house, who painted the mural hanging upside down from the window! A little later we saw another brand-new mural painted by the same kid, next to his front door. Heart-warming. 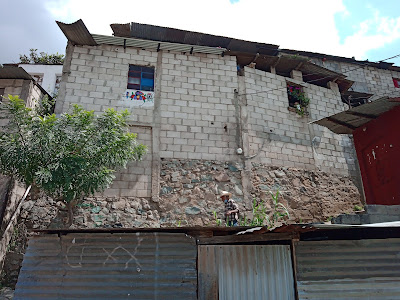 Yorman told us how a while ago at the central square of Jocotenango, he was approached by some of the “bad” guys.  For a moment he thought they were going to rob him. But no. They asked him whether he was one of the people involved in the mural project. When he confirmed it, they said that was cool. And if they could paint the houses on their turf, on the “wrong” side of the football field too? Things like that are priceless and means the project works.

Denilson and Yorman then led us to a small building high up the hills. Soon this will be a Lead-Up Café, a place where visitors can have a drink and members of the community participate in workshops and other activities. The place is basic, pending its renovation, but even so, the view is spectacular. 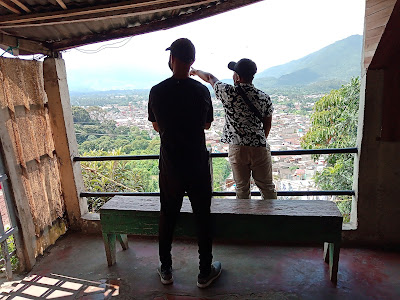 After a breakdance performance by Yorman, the tour ended at the pila. Then it was time to talk shop because next week I’ll start a series of workshops for the young painters from this neighbourhood and together we’ll paint the 11-meter-long wall behind the pila. I’m very much looing forward getting started. Denilson and Yorman were excellent guides and the whole project is incredibly inspiring. I feel humbled to be able to collaborate!

This project is sponsored by the Dutch foundation Colour4Kids.