So things don’t always go as planned. Exactly one year ago I arrived in Guatemala for a two-month stay, to paint some murals with kids. But just as we were about to start painting, after a full week of workshops, the state of emergency was declared because of Covid-and the project postponed.

Exactly a year later and I’m still here. Very excited to be able to work with kids again, this time around in San Andrés Itzapa, a town about an hour from Antigua Guatemala. I've been coordinating the project with Colleen Supanich and her husband Luís Azurdia who run a small NGO called Compartiendo Nuestros Bendiciones in this town. During the pandemic, Colleen and Luís have been distributing food for those most in need in their community as well as organizing educational activities for local kids who have missed a whole year of school. These kids have no computers or internet, often they don’t even have electricity at home, so no virtual classes. Colleen and Luís got permission for the mural at a public bilingual kindergarten (Spanish/Maya Kaqchikel) that caters mostly to children from poorer families on the outskirts of San Andrés Itzapa. Colleen has been planning to organize a clean-up in the neighbourhood as a supportive activity for the mural that promotes a clean environment for both people and animals. Older kids from the neighbourhood were going to help paint and for the little ones I designed colouring pages with the same images as the mural, to involve them as well. More activities were in the making, such as singing the wonderful environmental children’s songs by Guillermo Anderson.
I bought new paint and other supplies, including oversized used T-shirts for the kids to paint in, lots of hand sanitizer and extra face masks. The afternoon before the start of the mural I sent Colleen a message that I was ready to go. Promptly I got the one reply I wasn’t expecting:

Permission for the mural had been revoked.

San Andrés Itzapa had just gone from orange to red on the scale of Covid cases and all public events were prohibited. Darn!

But thanks to Luís’ perseverance and persuasiveness, basically talking to everybody in the hierarchy of the ministry of education, we did get permission after all. As long as we didn’t involve the kids, practice social distancing and wear masks. We were somewhat disappointed but relieved that the project didn’t get cancelled altogether.

First thing I noticed when we arrived on this chilly but brilliant Tuesday morning, was that the wall was much bigger than I had anticipated. Somehow it looked much smaller on the pictures I had been sent. Reality was 42 meters of wall, about 2.75 meter high at its lowest point and over 4.5 meters at its highest. I wondered if I’d brought enough paint and planned enough time…

But we did pretty well. No kids to help us, but Luís was a great asset, as well as my ever-lovely assistant Henry Calel. The second day my friend Marissa Loterina came along and somehow we managed to finish the whole thing in just two (loooong!) days! What helped a lot was that we were taken care of so well. Luís and Colleen provided us with a delicious snacks in the morning and both days we were invited to their home for some of the best food I’ve ever eaten. Piluyada and pepián, both super delicious. 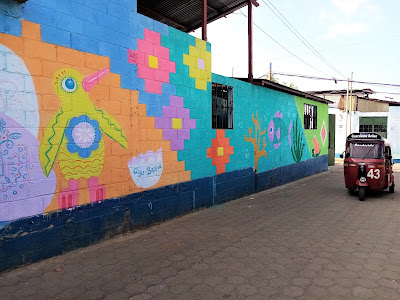 The last two were so far my favourite days of the year! Yes, the wall was pretty rough and we all ended up with blisters and sore wrists. The sun was brutal, the chill on the shady side of the building biting.  The ladders were a bit wobbly and quite heavy, but no complaints. It was lovely to see the reaction of the kids that were walking by. “Look, they’re painting my school! ¡Qué chevere! How cool!” 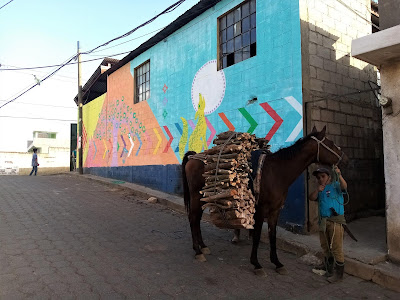 The one thing we didn’t get to do (or rather, didn’t want to, too tired), was painting the base at the bottom. But I left some money with Luís to buy paint and hire someone and it has already been painted! Just when we were finished the director of the school, Wendy Roxana Machán Cán, came by with a diploma for each of us and words of appreciation. I suggested the metal door at the entrance could use a new layer of paint and she promised to take care of it. She’ll also have signs with the name of the school made, to be put at the two designated spots on either side of the entrance. Then we were really done. We left behind a colourful corner in San Andrés Itzapa and new friends. Hopefully we’ll be back one day!

This mural (as well as 250 colouring pages for the kids) was possible thanks to the generous sponsorship of Dr. Jim Bader (of Mapleview Animal Hospital, Holland, MI, USA). Many thanks, also from Colleen, Luís and their community in San Andrés Itzapa! 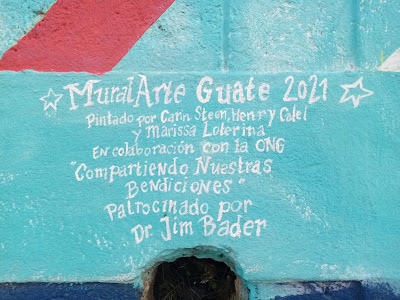 And of course, also many thanks to Colleen, Luís, Henry, Marissa and Gerson for driving us…