Arrive, unpack, set up and go! It’s been a few years for me since this was my routine, but some things are just like riding a bike. Within minutes the kids were completely engaged in painting and drawing, completely oblivious of the chaotic world around them. 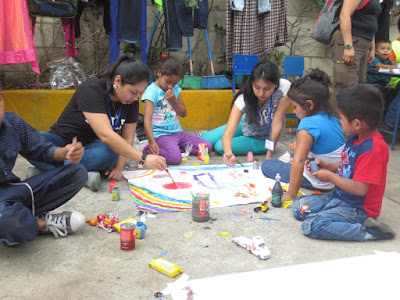 We were at a shelter for volcano victims (I almost wrote hurricane victims, I’ve had so many flashbacks to the time after Hurricane Mitch in 1998!) in Alotenango. There are two shelters at the central park, one in the main building of the elementary school, the other one in the smaller extension of 6 classrooms that momentarily houses about 120 people, among them approximately 70 children. Abi Ruiz, the administrative assistant of the Carpentry Project in Alotenango had gotten us permission to entertain the children for a few hours in the latter. No small feat, considering the government’s bureaucracy. But actually the coordinator was happy to squeeze us in because so far the only entertainment for the kids had been people bringing piñatas. Since the government has taken over most shelters, access is extremely limited in order to coordinate the relief efforts and at many shelters donations are even being refused. This has angered a lot of people, especially since the Guatemalan government doesn’t have a very good reputation to start with and has been preposterously lame in responding to the crisis. There are even many rumours and some documented cases of the military confiscating donations in order to, what? Handing them out in name of the government? I can’t tell for sure, only that when we arrived and while we there, a LOT of donations were still coming in. Elsewhere at the central park people were unloading tons of stuff and storing them on a rooftop. Right in the middle of the central park another Centro de Acopio was receiving donations, manned by both civilians and soldiers. 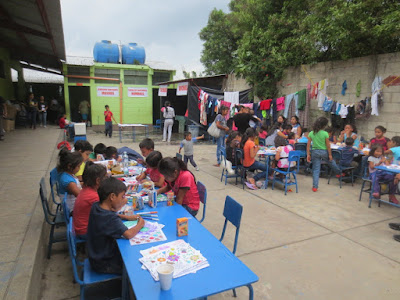 In the few hours we were there, the children received so many candy, juices and cookies that they were completely saturated. They left their goodies half eaten or would give them to us. A guy walked up to me, told me he was from Columbia and had candy and snacks for the kids but wasn't allowed to hand them out. He asked me if I could help him to get permission to get his donation in. I told him I couldn’t, that I was there to paint and draw with the kids only. I asked him, watching the kids receiving their umpteenth bag of goodies, if he thought it was necessary. No reply. When we left I saw him bringing in his boxes. 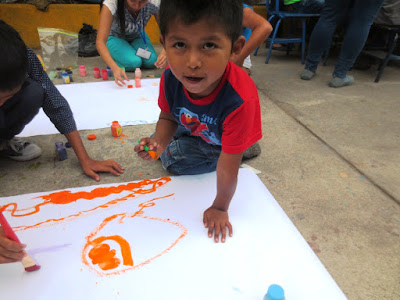 There was a snack in the afternoon (ham-cheese sandwich and more juice) and for the adults as well a constant flow of donations of clothes, shoes, diapers, toilet paper, underwear, cleaning supplies and food. I have no idea if this is the case in other shelters too and whether, for example, the people will actually receive breakfast, lunch and dinner. But my impression was that there is more than enough stuff coming in and I think that help should be focused on long term investment in housing, jobs, education and future disaster prevention. But then again, that’s just based on a few hours of observation. 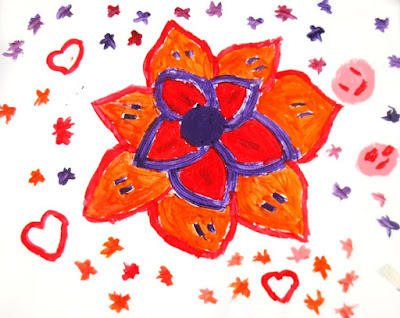 But back to the art workshops. We (me, Abi and three of her friends from Alotenango) were actually not the only ones there for the kids. A few representatives from a Guatemalan NGO (shamefully I’ve already forgotten its name!) were there to entertain the kids with games. We divided the forty something kids roughly in groups and they did a great job with about a third of them while we entertained the other ones. The kids loved painting on the floor on big sheets of paper. Others were totally into drawing with oil pastels and markers. We had brought adult colouring sheets (I mostly hate the colouring pages for kids, think they’re an insult to their abilities) and they loved those too. We even had a bunch of moms joining us. 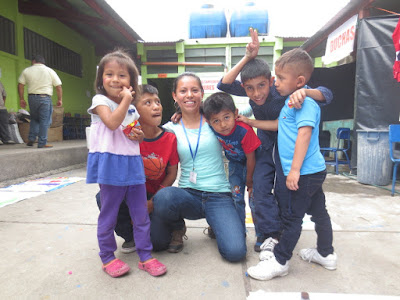 I read a bunch of stories, which were well received. The only thing we had planned and didn’t do was a bit of yoga. It was just too crowded and chaotic for such an activity.
So all in all we had a lot of fun! I even forgot the reason why we were there, but that was just the purpose. For a few hours, the only reminder of the disaster was the occasional funeral march passing by the building and the big stack of donated coffins in a corner. 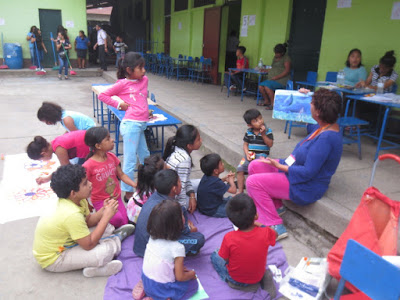 We were asked to come back and we will.
Thanks so much to everyone who donated (towards) art supplies, to Abi’s friends who did a great job and especially to Abi.
We’ll be back! 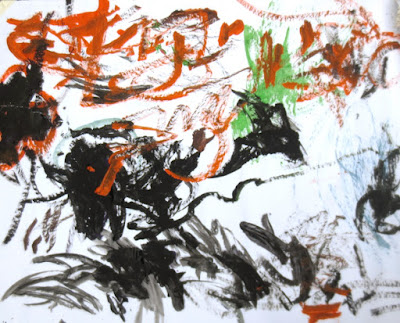 And in the meantime, yeas, donations are welcome. Next week we’ll revisit this centre and next Saturday I’ll be painting a portable mural with the kids at the main shelter as part of an ongoing activity that will last as long as needed. And of course there are (memorial) murals planned once the communities will have been rebuilt.
If you want to make a cash donation you can do so through Paypal (carinsteen@yahoo.com) or deposit on my Dutch bank account NL95 ABNA 0254 0313 74.
Thank you all. 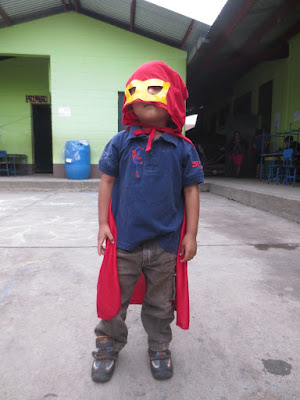