Last week I started painting two small murals at a new pre-school in San Antonio Aguas Calientes, an initiative by the NGO CreatingOpportunities for Guatemalans. The pre-school is just a small classroom on the roof of the building where the organization has its office and after school program. Eight of the cutest kids come to school every day to learn the alphabet, numbers (I even learned a new number while I was there: twenty-eight, twenty-nine, twenty-ten!), enjoy books and receive a healthy snack. The request was to paint something that incites kids to read and together with the teacher and director we came up with some ideas. The initial plan was to paint just the outside wall, made of plywood, but I thought the interior could definitely need some colour too. If the staff would whiten the bare cinder blocks, I’d paint something to cheer up the place.
I started outside and painted both sea and land animals in a Central American folk-art fashion. I included letters and numbers for the kids to identify. For the inside I came up with a colourful design full of geometrical shapes. With the teacher I discussed the activities that can help the kids to learn colours, shapes, numbers and letters. The kids can also make up their own stories based on the painted animals on the outdoor wall. 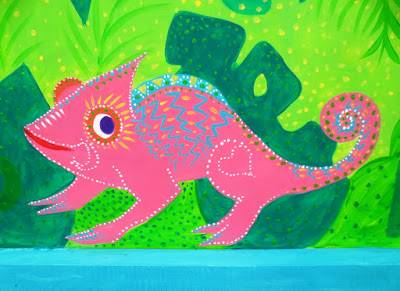 All in all it’s a great improvement. Last week I finished the outdoor wall in two days and had planned to come back on Monday to finish inside.

But around noon on Sunday ashes started to fall down. Amazement and awe quickly turned into annoyance having to sweep the stuff up. A few hours later the annoyance was replaced by total shock when we learned what horrific damage the volcano eruption had caused. The images that appeared on social media were truly horrifying, the loss of lives devastating. We’re all used to the constant eruptions of the nearby Fuego volcano, but this was beyond anybody’s imagination.
It felt strange to go back to work on Monday. Like so many people I felt the strong urge to do something. But what? There were already plenty of volunteers and the little I had to give would make no difference at all. I decided to stay put for the moment, realizing that this disaster was far from over yet and I’ll surely able to make myself useful in the near future.
So off to work I went after having confirmed that the office would indeed be open (although all classes were cancelled in the affected provinces.) The road was quiet and dusty. Sounds were strangely muffled by the thick layer of ash and volcanic sand that covered every possible surface. The bright colours of the Guatemalan countryside now looked like a post apocalyptic landscape. The sky was grey and so was everything else. 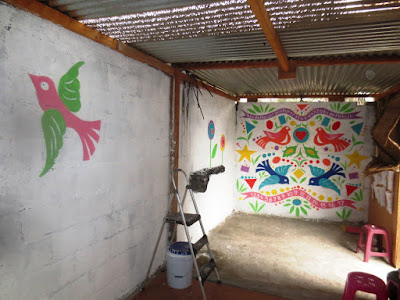 When the bus arrived in San Antonio Aguas Calientes, men and women, their mouths covered with mask and handkerchiefs, were already sweeping the road. Although closer to the volcano than Antigua, the amount of ash even seemed to be a bit less.

While I started painting, the NGO’s staff started sweeping the rooftop. It was a surreal sight, seeing all the neighbours on top of the roofs, small puffs of dust rising towards the sky. I finished painting early after noon and after a very dusty ride home, I spent a few more hours sweeping my roof and street until blisters formed on my hands.

We’re a few days further now and slowly an image of the destruction is forming. The death toll will keep rising and much help is needed and will be for a long time. I’ve decided to help with what I do best, and that is the arts. It doesn’t heal the burns, It doesn’t replace homes, but it does distract children from the trauma they’ve been through. It will help them express their fears and anxieties; it will facilitate their communication and the art of creation might give them some much needed hope for the future.

I’ve been in touch with several local organizations, educators and artists. We’re all willing to contribute by offering art workshops, story telling, yoga classes, theatre and other activities to relief the burden of the children that are currently in the shelters. I have already received some donations for art supplies and am ready to go.

The problem so far is that we’re not allowed into the shelters by the military in an effort to keep things organized. We have to go through official channels to get permission so help will be evenly distributed where needed. That’s an honourable goal, but it might be very ineffective in Guatemala’s bureaucracy and it excludes many organizations and individuals that have valuable services to offer right NOW.
The permission has been requested and if granted, we’ll be able to go to the shelter in Alotenango next week on Saturday. That’s 9 days from now and we have no idea what kind of activities are being offered to the 200 kids right now, if at all. Only next week we’ll be able to assess the situation and start planning for long term art therapy and other activities, until the last kid has left the shelter.

So what to do now? Following local NGO Educarte’s example I’ll go to the central park in Alotenango tomorrow to offer art activities to the children there with the help of volunteers from the Carpentry Project in the same town. The central park is the place where people gather in search of missing loved ones and where wakes are held for the recovered victims. There will be many kids around, some directly affected by the disasters, others just confused, scared or disorientated, especially since the schools are closed. It seems to be a good place to start.

To be continued. In the meantime, donations for/of art supplies are welcome… 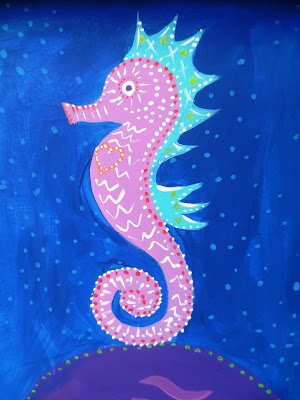