If I’d have to describe the Dominican Republic in just one word, I’d say: loud. Not that Guatemala is an oasis of calm, but my, in the DR they have raised being loud to an art form! The most popular pastime seems to be driving around in a car, all windows open with a HUGE speaker on the backseat, carefully tucked in with the seatbelt (which I’ve never seen used on a human), vibrating distorted bachata or reggeaton. At a popular hangout spot on the boulevard I once saw no less than THREE cars parked next to each other, each competing for being the loudest while their occupants were standing nearby conversing. Or attempting to.

If people talk, it sounds like they’re at each other in a way that makes Italians sound like meek sheep. But that’s just the noise level. Nothing is happening. Which is what happens most of the time, a whole lot of doing nothing, preferably on the veranda you see in front of every house.
All in all it was quite a culture shock, going from the mountains of Guatemala with its humble indigenous people to the lively Caribbean town of Puerto Plata…
How I happened to end up there is because of the connection with the Dutch foundation Colour4Kids.I’ve worked with this foundation twice before in mural projects in Progreso, Honduras and last year they funded part of the community mural I painted in Chimachoy, Guatemala. In Puerto Plata they built three extra classrooms to an elementary school and the mural was the cherry on the cake to finish this project. The project was initially scheduled for late November last year, but at the time we had to postpone the trip last minute because of the rains and flooding in the area. 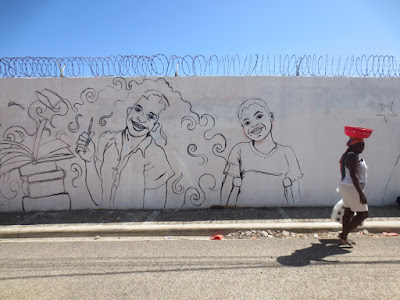 The school is located in a lively middleclass neighbourhood of Puerto Plata. The building used to be a basketball court, but was converted into a school thanks to the effort of some mothers from the neighbourhood who got organized and whose president, Rosa, helped us with the logistics for this project. The front wall is an entire street block long and is very visible along a well travelled street, a perfect location for a community mural! 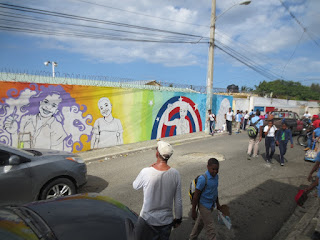 The theme was Children’s Rights, as determined months before we started the project in collaboration with Yudelka Morán, the director of the school. The idea was to have the children help paint but since it was logistically too complicated to have all 200 students involved, I designed colouring pages based on the mural design to be distributed among all students. There are six colouring pages in total, each depicting one of the six main figures/children’s rights and they fit together as if a jigsaw puzzle. Actually, each colouring page depicts much more than just one right. For example, the second scene of the mural refers to gender equality, but it can also be interpreted as a call against racial discrimination or any other form of inequity. That’s open to discussion.
Each student received one or more colouring pages which helps them to have a stronger connection with the mural and hopefully also be more aware about children’s rights (and obligations). 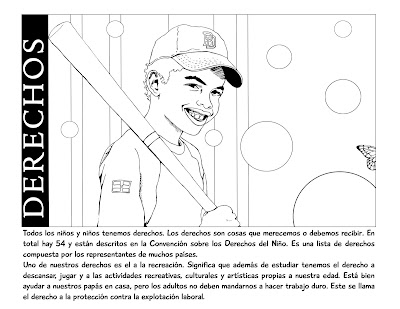 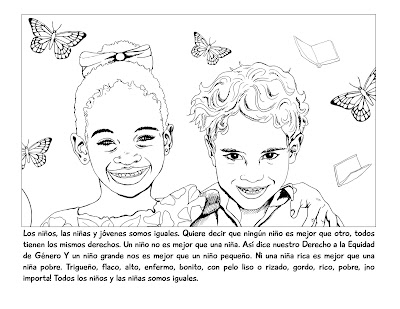 Erik van Middendorp, of Colour4Kids had already been in the DR for two weeks when I arrived and one of the things he had arranged was to have the wall cleaned and primed. The weather forecast wasn’t good – it was actually pouring rain when I arrived- so the less time we would waste, the better. On May 1st, while the kids had a day off, Erik and I started drawing the grid and sketching in black.
The second day we added some colour and slowly the wall started to transform. We worked from background to foreground and from top to bottom. We outlined the bottom part, so we could have the kids help us colouring those parts, which happened on day 5. About twenty kids were picked out to help us paint and then the transformation was complete. The last two days were for touching up and details. And then, on Sunday May 7th, the work was done! The last thing I did was painting the light post in front of the mural in a cute polka dot pattern, because its ugliness stood out too much. 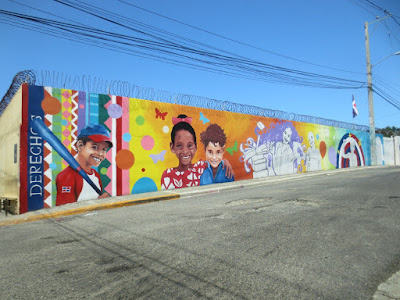 All in all I was very happy with a result. The Toucan acrylic paint that I had never worked with before was of excellent quality with nice, bright colours. The wall was even and smooth and our audience very supportive. The corner on the left happened to be the meeting point for the moto-taxistas, guys dressed in orange vests who drive you for 50 Pesos ($1) on the back of their bike to your destination. From that corner they loudly discuss the world, the mural included (very positively!)
The old man who lives with his kittens across the street was so moved with the mother I painted, embracing her child, and he kept telling me so. The lady from the corner across the street lent us her ladder and brought us our daily dose of sugary coffee. Rosa was there too the whole time, keeping an eye on everything from her chair in the shade and frequently telling Erik to work a little harder. Despite the heat and the noise level, the result was what I hoped for and the weather had collaborated beautifully. Ready for the next one! 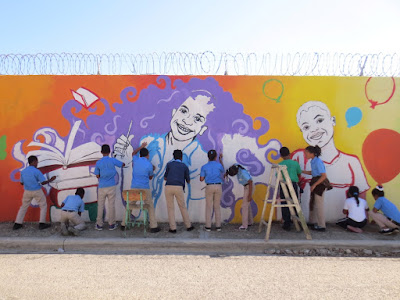 The next two murals were painted at the side walls of a new school building in La Union, about a twenty minute drive from Puerto Plata. The school started by Roberto and Judith Terrero in a nearby slum that is mostly inhabited by Haitians. They soon had over 200 students cramped into a very inadequate space, but now have two school buildings and a kitchen built by the Samaritan Foundation. The school currently caters to 300 students, but can expand to 500.
The theme the director had asked for was the Dominican Republic’s history, but I felt rather uncomfortable with the choice. First because I hardly know anything about it, and interpretation of a nation’s history, especially with such a controversial past as this one’s, is a very delicate issue. Especially if most of your students are Haitians. It’s also visually not an easy task, so after some emails back and forth, we settled one mural about children’s rights, the other one a portrait of the Mirabal sisters.
Erik had become a well trained assistant by now, so we had both walls primed and gridded in no time. They were small too, only 3 x 2.75m, which might seem big enough but still is 8 times smaller than the previous mural. A piece of cake… 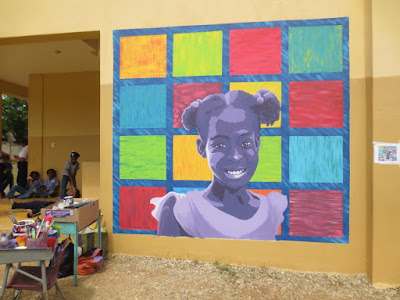 We started with the mural on children’s rights. I started sketching the girl while Erik started on the rectangles in the background. We later treated those with a dry bush in contrasting colours, to make them a bit more organic and dynamic, inspired by Eric Carle’s famous illustrations. The kids mostly wanted to know who the girl was. Some were convinced that it was Gladys’s cousin, the deaf mute girl that lived around the corner, but others said it was Tatiana from Grade 8. She was quickly summoned and I took a picture of her in front of the mural so you can judge for your self.
Actually, the design was based on the random picture of a girl I had found on the internet. I just wanted to use an image the kids could relate to. The fact that they recognized all kinds of friends and relatives in her means I succeeded. But when I explained that the girl actually represents all girls, or even all children and that I painted her purple on purpose, because black and white are not skin colours at all, they just looked at me blankly. The purple, okay, but the girl? Nah, that really is Tatiana!
Two days of painting and the mural was done. The kids received a colouring page of the design and I was ready for the next! 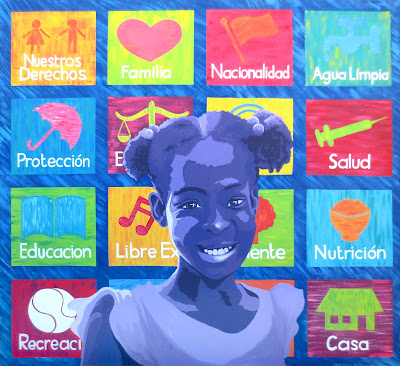 This one was a bit different in colour and tone. I started with the features of the women in the darkest shade and then added one lighter tone after the other.
The Mirabal sisters were easily recognized by all the children, but when I asked them why they were so famous and what they had achieved, not all of them were too sure.
Patria, Minerva and Maria Teresa (and their husbands) were all involved in the resistance against dictator Trujillo. The husbands were jailed and it was when the sisters came back from a visit on November 25th, 1960, that their car was stopped and the women clubbed to death by the secret police, most likely on Trujillo‘s direct orders.
Ironically, the disgust and revulsion abut this deed made the resistance fiercer than ever and Trujillo was finally successfully assassinated on May 30th, 1961.
The sisters are now national heroines and nationwide acknowledged on murals, on monuments, on banknotes and souvenirs. 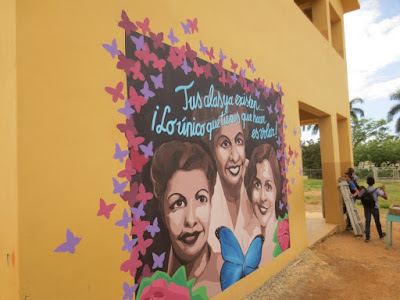 The quote on the mural is not by one of the Mirabal sisters, but an anonymous one I liked because of the reference to flying (their code name was “The Butterflies”) and, implicitly, education. It translates as: Your wings already exist. All you have to do is fly! 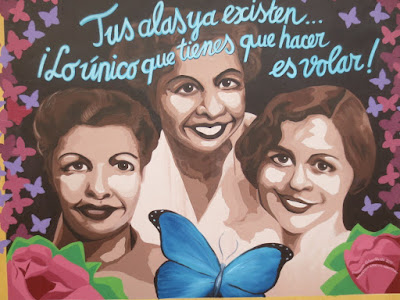 On the afternoon of the first day it all of a sudden started to rain. At last! Luckily, due to the high temperatures, most of the paint was already dry. Only Minerva’s cheekbones that I had just applied started to run and looked like bleak tears. But that was quickly fixed the next day.
The last day of painting was hot and humid, but it didn’t rain. Erik painted a LOT of butterflies while I focused on the faces and text. And then we were done! Mission accomplished, finally time for some sightseeing… 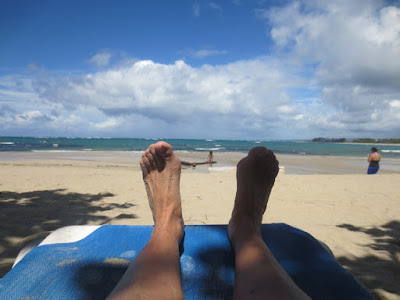