Four Pups and a Kitty in San Martin Jilotepeque 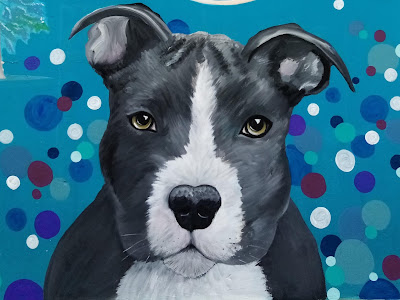 Oh, how I’ve missed this…. The noise, the dirt, the inconvenience, the silly comments by passersby, the heat, the teamwork, a shared lunch, the exhaustion afterwards… That’s what painting a mural in public is all about! Since March 16, when the state of emergency (Covid) was declared here in Guatemala (the exact day I was to start a mural with a group of adolescents), I’ve only been able to do just a few community murals (in a cat shelter, a clinic and library of a school), but none so public. This was so much FUN!

So how did we up in a town called San Martín Jiloptepeque? Well, it’s the dog connection. I met Cristy Velasco during one of Unidos para los Animales’ sterilization clinics in Antigua. Cristy is an incredible woman who loves (LOVES) dogs and does whatever she can to protect, rescue or care for them. This in a rural area where there is very little awareness about animal care and many dogs and cats have very tough lives. Sterilization is not common thing and not easily available, let alone affordable. Cristy explained that people keep dogs as doorbells, tied up to a tree or fence, just there to bark when someone approaches. Often the dogs are chained up their whole lives, the chain padlocked around their neck for lack of a collar. Dogs get kicked at, abandoned when sick or old and unwanted puppies, well, let’s not go there…. In the meantime, dozens of unsterilized dogs roam the streets of San Marin Jilotepeque, rummaging through garbage, spreading disease, reproducing and attacking when feeling threatened. And this of course leads to more opposition against the canine population, as if they have a choice or it were their responsibility. 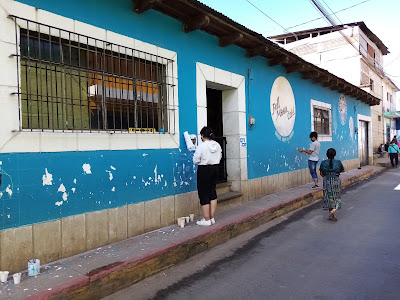 Although sometimes it feels like fighting a losing battle, Cristy is not one to call it quits. She has over a hundred dogs in an abandoned construction site for a hospital (which unfortunately she’ll have to leave soon), about a dozen in her restaurant, I don’t know how many at her home, plus a whole bunch on the street that she feeds and has spayed/neutered whenever she can. All this with very little support from the community. And on top of it, a pandemic and two hurricanes. Leftovers from her restaurant are given to the dogs, but with the Covid restrictions, she has had little business, especially now that the international medical brigades she usually caters to, have postponed their trips. But again, Cristy never gives up! Only last week she went to Campur in Alta Verapaz, a village hit hard by tropical storm Eta, followed by Iota. The whole village has turned into a lake. No human lives were lost but people had to leave in a hurry without any possessions or pets. Cristy and some likeminded friends went off to see if they could rescue any animals left behind. She told us the situation was heartbreaking. Some animals were able to make it to shore, where they now roam, starving and disoriented. Others were trapped on top floors of buildings or small islands that have formed amidst the debris. The problem is that the water level keeps risings, even as we speak, and many animals will drown, soon. Already there are lots of carcasses floating in the water, alongside stoves, beds and other objects that were once valued possessions. Cats are hiding in the branches of trees. Dogs bark day and night from roof tops. Cristy and friends left food on the shores and managed to rescue 11 dogs and 3 cats. Sadly, one dog jumped back in the water, desperately searching for her puppies that Cristy knew had already drowned. They were not able to catch her again. 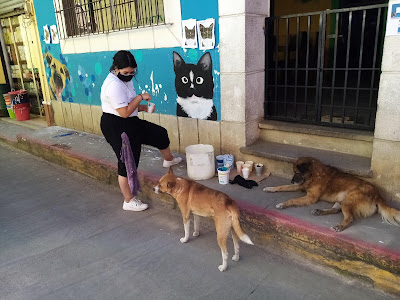 Even if the people of Campur would like to go searching for their animals, they can’t. There are only two boats available (of course, in this mountainous area where normally the biggest body of water is a just a creek) and the boat owners charge $1.25 per person or animal. That doesn’t seem a lot, but it is, if nothing is all you have. Cristy and friends rented one of the boats for a time way too short to explore the entire community, because at $200 an hour, their budget didn’t allow for more. But they’re planning on going back soon. Donations towards food, medical attention for the rescued animals and “boat time” are very welcome (a boat they can borrow would even be better!). Below information on how you can help. 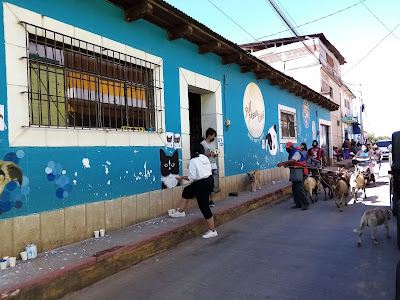 Back to the mural. Although things are changing in San Martin Jilotepeque, slowly, a lot more needs to be done to educate people on how to care for animals, the importance of vaccinations and sterilization etc. That’s why Cristy asked me if I could paint something on the wall of her restaurant to help create awareness. Well, if that means paining a few dogs, yes of course! 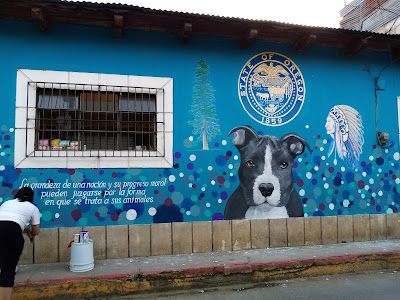 So I made a design around a few existing painted elements, in such a way there was no need to paint the whole wall from top to bottom, but giving it a serious facelift nonetheless. Quite a big job that I hoped to do in just one day, because of the distance and costs involved. My assistant Henry Calel was there to help me, as well as his friend Keith (pronounce Kate) Salazar and indeed, we did manage, although it was a loooong day, painting from 8.30am till 6.30pm! Not quite non-stop because Cristy made us a delicious refacción (pizza!), followed by a very special treat for lunch, Suban-ic, a local delicacy consisting of chicken cooked in a sauce wilt loooots of chile. Delicious! 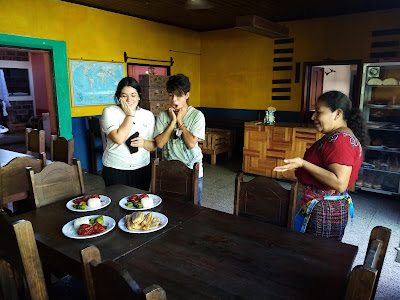 Anyway, the mural design is of a few cute pups, a cute kitten and the quote: “The greatness of a nation and its moral progress can be judged by the way in which its animals are treated”, apparently wrongly attributed to Mahatma Gandhi. Hard to say if my work will make a difference, but, well, the wall looks better now, I think. And it was fun to do, although not easy, in this narrow street with its constant stream of cars, goats and trucks with barely enough space for just one car to pass. And we had to share the narrow sidewalk with a furry audience. But it’s done, and just in one day, as I hoped for. 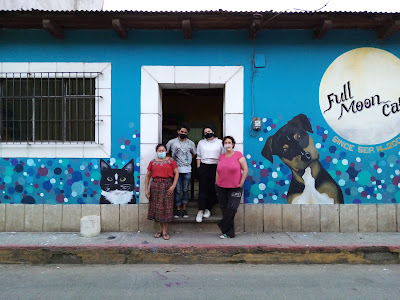 I’d like to thank Henry Calel and Keith Salazar for their help; Cristy Velasco for the delicious food and for taking care of the dogs of San Martín Jilotepeque. And of course, the sponsor of this mural, our favourite veterinarian Dr. Jim Bader! Jim was initially going to sponsor the mural I had planned for last March, but when I asked him if we could redirect the funding towards this mural for Cristy, he wholeheartedly said YES! So, thank you very much! 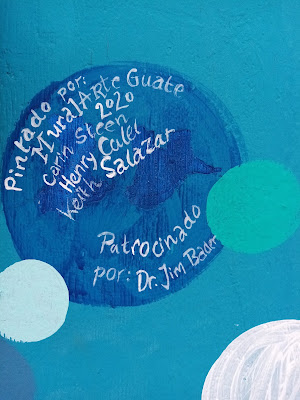 If you’d like to help Cristy taking care for the dogs of San Martín Jilotepeque or the rescues from Campur, you can do so by lending your boat (seriously!) or making a donation to her Guatemalan account (María Cristina Velasco Toj, Banco Industrial # 059-006050-5) or her daughter’s Paypal. I asked Cristy if she had any plans on formalizing her project but she says it is very hard to find support in the way of board members for an official NGO. She tried a Facebook page, but any publicity has resulted in more animals being dumped on her, rather than help coming in. But she’s totally legit and any donation will definitely go directly towards the dogs. 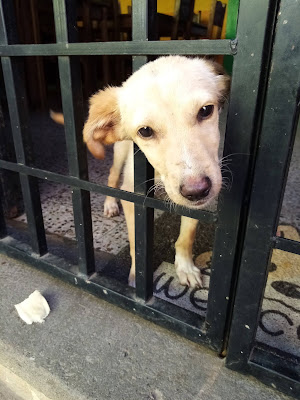 PS. In San Martín Jilotepeque I realised yet again how important a role education can play in creating awareness about animal welfare.  Especially educating children, who mostly love animals anyway and are more receptible. That’s why I’m working on a book for children with lots of colouring pages, activities and practical information on how to look after a pet. The book is particularly designed for Guatemalan kids in lesser developed areas. To design, print and distribute 1500 copies of this book, I’m still looking for funding (about 2.500 Euros). If you happen to know of any available funds or NGO’s that support these kind o projects, please let me know!

Be well, be safe and pet your pet.