Back to the Shelter! 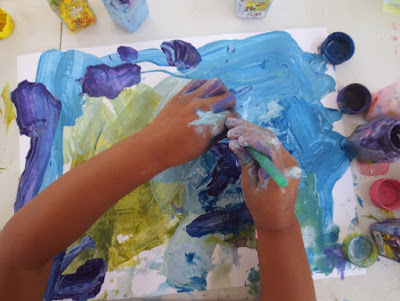 Time flies, time crawls. It’s been almost five months since the Fuego Volcano erupted and uprooted the lives of thousands of people. Much has happened since, but many people still live in shelters and depend on handed-out meals every single day.

Shortly after the disaster struck I started, in collaboration with several volunteers and donations towards the supplies, conducting art workshops for children who were then accommodated in the public schools in the towns of Alotenango and Escuintla. Two months ago the residents were moved to a bigger and more permanent shelter, just outside of Alotenango, along the (now repaired) road to Escuintla. This was about the same time I traveled to Europe, so it was over two months since I had been to the shelter. I was eager to pick up the routine again, but not sure I’d be able to get permission. Or even where to start asking…
Luckily I quickly got the contact of one Sandra Barragán who works at the Municipalty of Alotenango. To my delight she immediately answered my messages and offered to take me the very next day to the ATU (Albergue de Transición Unifamiliar, or Family Unit Transition Shelter) and put me in contact with the person in charge of the agenda. If only I could bring a written proposal of what kind of activities I intended to do with the kids. No problem!
Once at the shelter I got a short tour and information about the shelter: it accommodates 147 families (over 600 people in total), more than half of them children. The families live in wooden structures consisting of four one-room units. Each family has one or two units to live in, depending on the number of people. There are two areas with toilets, showers and pilas (sinks for laundry). Very much like any camping. The wooden structures are erected closely together, leaving but narrow open spaces. Open fire is absolutely forbidden because of the fire hazard. So no cooking, and that’s why the residents receive three meals a day in the dining area. There’s a fully equipped kitchen, but I’m not quite sure if that’s where the meals are being prepared, let alone by whom.

Next to the kitchen area are several wooden buildings that are being used as offices, both by the municipality and NGOs.
But to get back to the whole permission thing, I DID get permission! Not a small feat, because a group of psychologists was turned down right before me and apparently there are still many institutes that offer services and goods but are rejected. I don’t know why I did get permission where others didn’t, but it might have helped that the coordinator, Jorge, turned out to be someone I had seen many times before (and more importantly, he had seen me!), as well as the kids who came running up to me for a hello and a hug.
So I could get the Tuesday afternoons and even a (rather small, dark and unfurnished) work-space. With the promise that I would send the required detailed list of planned activities and that Jorge would arrange furniture, electricity and enroll participants, we agreed on two workshops a week for two different age groups. Now that the school year in Guatemala is ending, the only problem could be that there would be too many participants, because the work-space doesn’t allow for more than 20 kids per workshop and there are 251 kids between the ages of 10 and 17!
That same afternoon, last Friday, I sent a detailed list of proposed activities. Art, crafts, yoga, mindfulness exercises and storytelling for kids 4-9 years old. For the older ones (10-17) painting, drawing and art history. The space is limited yes, but it does allow me for more intimate and better planned classes. The first workshop scheduled consists in decorating individual folders in which the participants can keep their art work.
On Monday I went shopping for supplies and hired my some-times-assistant Henry Calel to help out preparing and during the workshops. No reply yet on my detailed lesson plan, so I let Jorge know I was all set and would come the following day.

By the following mid-morning I had still no confirmation (those who live in Central America know that nothing gets done here without confirmation, re-confirmation and sometimes even re-re-confirmation). At noon I got a message back that all was set. Right on time.

But I had an inkling that not all would be set, So I already deviated from the schedule and prepared a low key art activity instead.

And surprise-surprise, our work-space was still dark and unfurnished. And there were no kids enrolled whatsoever. But if we wanted to, we could set up in the refectory. And so we did. 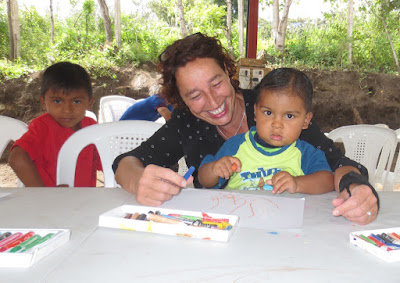 No publicity was given to our activity at all, so not one kid showed up at first. But luckily, we were in the area where cell phones can get charged, so there was quite a bit of traffic of mums who were happy to leave their little ones with us. Those kids could barely look over the edge of the table, but they had fun drawing nonetheless. One little girl in particular wouldn’t put down her crayon, but was so tired she fell asleep over her artwork several times.
One by one kids started to drop by and join the group. It was great to see old friends back, there were only a few I hadn’t met before. It was a bit chaotic and messy, working in such an open space, offering an activity without a beginning or an end, but actually not very different from our previous workshops with those kids in the corridor of the school building they were then living in. All in all it was a lot of fun )and lots of volcano paintings) and all kids promised to join us next week. We even might have a furnished work-space!

Thanks to all who made this possible, too many to name every time, but your help is very much appreciated. More to follow soon!
As for the murals I hoped to paint? That’s not going to happen the way I hoped for because the central government doesn’t allow the wooden structures to be painted. But there are new plans in the making, so stay tuned….