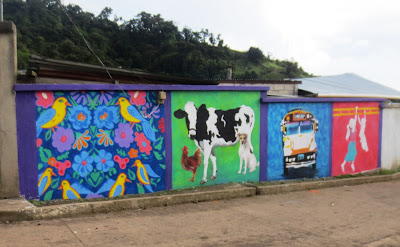 The Community Mural Project in Chimachoy has taken off! Finally, because the project started well over a year and a half ago when I first spotted the wall and the itching started… Then the fundraising (not the easiest part!); the logistics with various community members; prepping the workshops for the kids; conducting those workshops in which we picked and discussed the themes; and then sorting through dozens if not hundreds of the kids’ drawings and pictures in order to finally be able to make the designs. Oh, and then there was the wall repair and plastering, done by the parents, as well as having the students translate the names of the different sub-themes in Maya Kaqchikel. So when the first brushstroke went on the wall last Thursday, many an hour had already gone into it. But somehow, painting that first panel made the project so much more real. 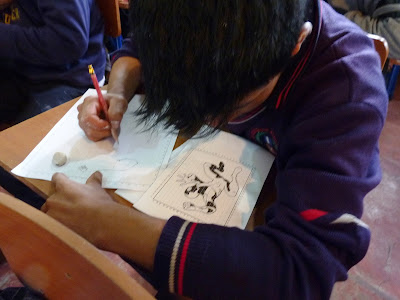 Last Thursday, twenty-six high school students learned how to copy a design on a wall by using a grid. I used an exercise in which they had to copy a small image of a super hero onto a bigger sheet and as always, this was a big hit. (If you ever need a few quiet hours with a bunch of adolescents, let them copy super heroes, success guaranteed!)
We had started the morning priming the first eight panels of the mural (out of twenty-six). By the time the kids finished their drawing and the three designated photographers of the day were done documenting a few more themes, we were ready for drawing grids on the wall with chalk. This actual work was less exciting than copying a super hero, but the kids did a good job nonetheless. In the meantime I had started sketching and there was just enough time before school was out to have a few students helping me paint. 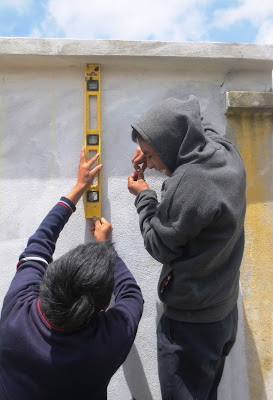 Clouds gathered soon after lunch and covered the town of Chimachoy in a thick mist while the temperature dropped considerably. Twice I had to take shelter from the rain but I managed to finish the first panel. It had been a productive 10-hour workday. But still, only one panel done and twenty-five to go… 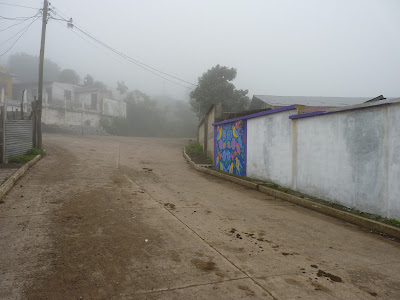 On Friday I came back with reinforcement. I had asked my fiend Jessica Hoult to join me, not just for fun company, but also because she’s good at painting and amazing with kids. Just before we left at 6.45am I sent her a message to dress warmly. And a good thing too.  We left a gorgeous sunny Antigua, but the higher we got the mistier. When we arrived in Chimachoy, visibility was about three meters. Getting out of the car brought an immediate chill to our bones, despite four layers of clothing. Strange to be freezing our butts off in a tropical country in July and oh how we wished we had brought gloves! But how uplifting to see, despite the thick mist, the colours of that first panel really standing out and smiling our way. 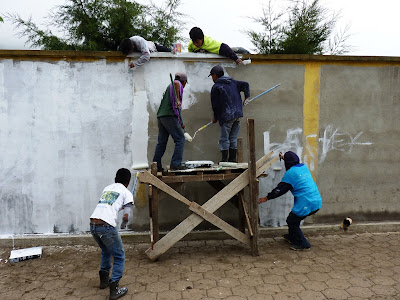 Cold or not, the sixth graders did show up as promised, even though they officially had the day off. We quickly put them to work, priming the rest of the wall. The further down the wall they went, the higher the panels, but a few sawhorses did the trick. Like monkeys the kids where up and over the wall and in less than two hours the rest of it, all 45 meters long, was primed!
Then the kids went around town with Jessica to take more pictures expressing the various sub-themes of the mural, all representing their own culture. In the meantime I started sketching so afterwards the painting could get started. 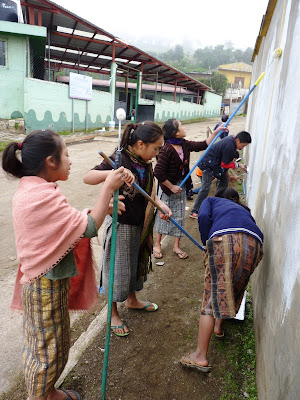 Around noon the clouds started lifting and the freezing cold made way for a fierce sun and an incredible rise in temperature. Shedding layer after layer and getting sunburned in the process, the next three panels quickly took shape. We occasionally got sniffed at by a passing cow, peed at by a curious dog, but otherwise the afternoon was uneventful and productive, even though we didn’t entirely finish the last two panels. But at least all the workshops are done with; all the visual material needed is in the house, so now we can focus on the painting. Next week we’ll continue! 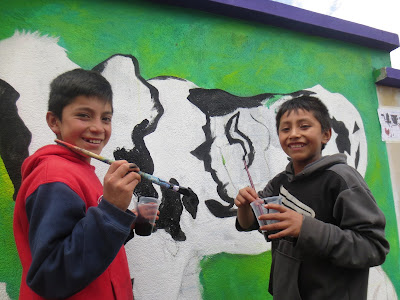 Thanks so much to all our sponsors, the kids, the teachers, the friendly guy on a horse who brought us bags of water (yes, water comes in bags around here) and of course the fabulous Jessica Hoult! 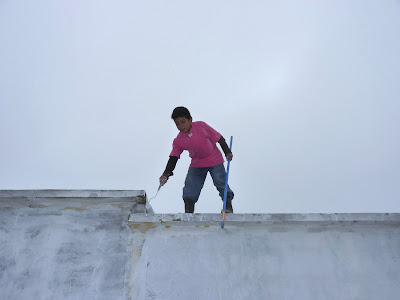 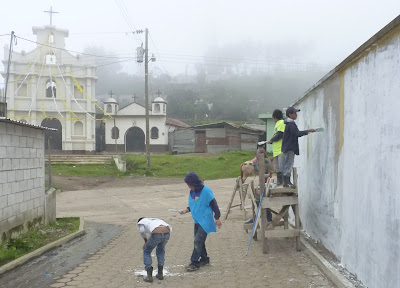 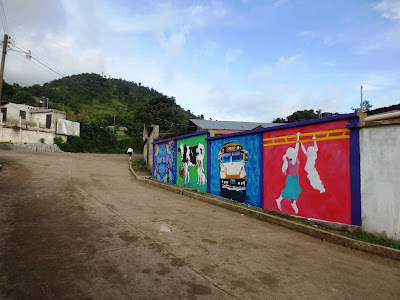