An Audience of Kids and Cows

What I love about mural painting is that you never quite know what to expect. Planning and preparation are important, but often plans change along the way. The community mural in Chimachoy is no exception. Initially my idea was to prepare all the designs and then paint during a full week with all 65 high school students under the supervision of a team of volunteer artists. But that turned out to be a logistic nightmare, because how to plan dates for painting if you don’t know when the volunteers will be available, how much paint will be needed, if transportation can be arranged and then, of course, the weather…  So instead I decided to go up there twice a week, paint as much as possible with a few volunteer students and take things as they come. A good thing too, because it turns out that the high school students are not available in the afternoons (they have other responsibilities and many of them live in remote villages surrounding Chimachoy). I’m also going to need waaaay more time than just a week for painting. So far we’ve done a third of the entire wall in four days, so go figure. That is actually a major problem, because there’s no budget for extra trips, so things need to be speeded up. 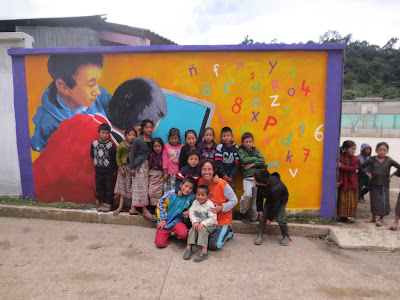 Initially I was planning on painting a different image on each of the 26 panels. So that’s 26 different murals. What the heck was I thinking??? After the first four murals I decided to merge panels (makes sense, since some are the same height anyway) and make two big murals instead of four small ones for the first part of the wall. It feels a bit like cheating but it is way faster and I like the result of working on a bigger scale. It’s also easier to put the students to work because there’s less detail to paint.

So last Thursday we started the new approach. The students were great drawing the grid (they really got the hang of it) and another tremendous help was the presence of Alex Barnica, a painter and muralist who did a great job painting the corn panel. It was again freezing cold in the morning and crazy hot in the afternoon, but fortunately enough, no rain! Yet again we were constantly surrounded by kids, cows, horses laden with all kinds of stuff and locals walking by wishing us a polite buenos días, even when passing us twenty times a day. After two long days of painting, seven murals are now completed. Here they are:
This design is based on an embroidered huipil the women wear here. In the end I’ll paint “Welcome to Chimachoy” over it in three languages (Spanish, English and Maya Kaqchikel).

Domestic Animals is the theme of this one and the greatest compliment I could ever get was from a cow that passed by, looking up at his painted peer and mooing loudly. Some sixth graders were less impressed and told me I forgot to paint its tail and eyes.

La Parrameña! This is the one bus (from Parramos, hence the name) that leaves Chimachoy at noon and one of the kids’ favourite murals. Drawn and mostly painted by Jessica Hoult who was so kind to accompany me last week. The bus driver likes it too… A truck driver asked me if I could paint his truck too. Since it was an ugly thing, his truck, nah….

Playtime, depicting Allison and Brian, two of the school’s students. Brian was glowing with pride and about twenty other kids now want to be on the wall too.

According to mythology, the Maya people were created out of corn and it is still their main source of food. Depicted here are four different colours of corn that represent the different peoples of the world as well as the cardinal points (yellow/ South; Red/ East; white/ North; black/ West). Beautifully painted by Alex Barnica, for which a big thanks!

This mural is right next to the entrance of the school, so it made sense to use education as a theme. Depicted are to sixth graders (Danilo and..???) and a computer, just to give it a contemporary touch. Swirling around are numbers and letters of the alphabet and already the kids have invented the game who can find all letters of the alphabet first.

At the other side of the entrance used to be the name of the school. Here again, with a girl holding a piece of paper. I didn’t know the name of the girl, but as soon as the first paint strokes went up, I heard: “It’s Jackie!!!” from all passers-by, so I must have painted a liking portrait. 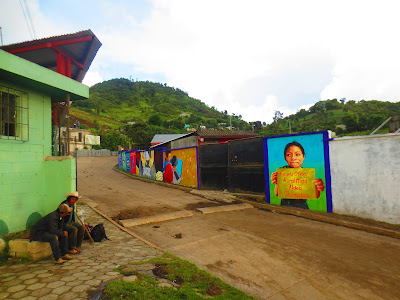 And that was it for this week!
Yet again, a big THANK YOU to Alex Barnica, the students who helped out and the following sponsors: The Pollination Project, Coulor4Kids Foundation, Uno Más Foundation, Diane Morton, Tessa de Goede, Willem Meijnckens, Evert-jan Velzing, Rosan Breman, Ineke en Jan de Smidt…

For more pictures, please visit our page on Facebook.
And yes, donations are still very much appreciated!