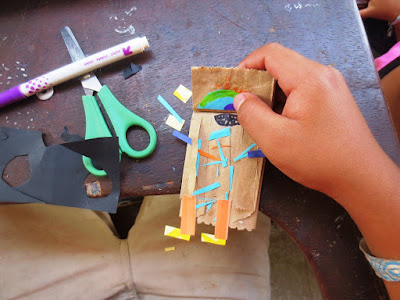 Weird how even a disaster eventually runs into a routine… People in the shelters are well settled by now, as if they never lived anywhere else. But there’s also a growing sense of boredom and depression. So it’s a real good thing that since this week in Alotenango kids are going back to school!!! Both the children from the shelters (which are public schools) and all the other kids from Alotenango are now receiving classes in El Calvario, another school building in town. No idea how they all fit in, but I’m very glad about this development. 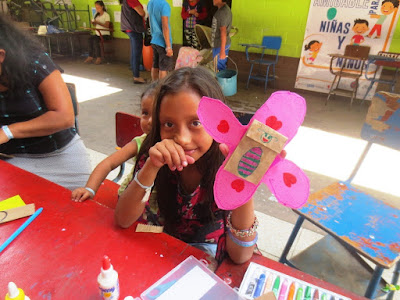 Last week I went to Alotenango with Sharan Gainor, Henry Navarijo and Otoniel of the Carpentry Project. Upon arrival in the Municipality we were told we couldn’t go to our regular spot, the smaller shelter, because “The Government” was there to talk to the people (Again or still? See previous post). But we could go to the main shelter. It was a pity we wouldn’t get to see “our” kids, but since we were already there, we went to the main shelter. We set up in the smaller of two patios, surrounded by 14 classrooms, just to give you an idea how huge this school is. The activity of the day was making puppets out of paper bags, which the 25 participants seemed to enjoy. After that I read some stories and then it was lunchtime and the kids ran off to eat. It was an okay experience, but the children weren’t as enthusiastic as the ones in the smaller centre. (Or maybe I’m being judgmental because I’ve grown to like “our” kids so much.) 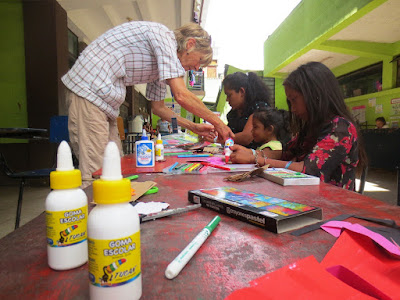 On Saturday the 14th Jessica Hoult and I set off for Escuintla. The shelter we had visited previously (a Catholic Church) has been evacuated with its residents reassigned to other shelters. The one we visited this time was in a public school and we were welcomed by its director who runs the shelter. The ambience was pretty relaxed. We repeated the same art activity, this time with much more success. The kids we’re really into it and made one puppet after the other. Then they started making all kinds of other stuff too, such as handbags out of the paper bags. It was really nice to see the kids so emerged in their art work. Going back tomorrow! 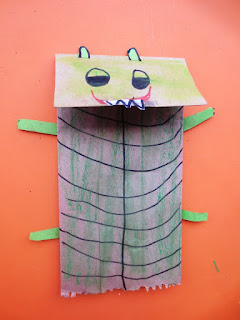 Yesterday we returned to the smaller shelter in Alotenango. Now that the kids go to school we had to change our schedule from morning to the afternoon. We didn’t have that many kids, only 15 or so, because some other volunteers were doing activities too, such as washing hands with the little ones and board games. Deducting from the volunteers’ T-shirts they’re psychologists, sponsored by a long list of the biggest organizations (Save the Children, UNICEF etc.) They’re coming in a few times a week now. And since the kids are also going back to school now, I have to rethink our weekly visits. Especially the ones to Escuintla are rather gruesome. Last week it took us three hours to get back to Antigua! 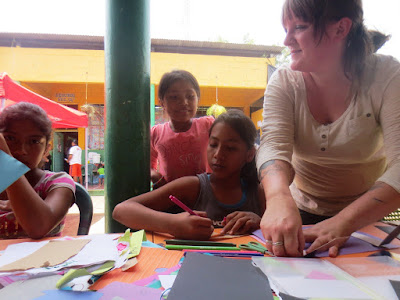 But as long as kids want us to come, I’ll be going, even though I go through my art supplies rather fast. For the first time ever in my experience I have trouble controlling the supplies and almost every time we lose a pack of markers or a few scissors. I think it’s because the kids receive so many donations, they just assume everything is for free. Last week we even lost a favourite (and borrowed! Sorry Sarah Peller!!!) book, The Very Hungry Caterpillar. A little girl ran off to her dorm with two books. When we asked for the books back (“because we still had to read it”), the mom told us the kid had said we had given them to her. In the end we only retrieved one of the books and The Very Hungry Caterpillar stayed behind. I hope they enjoy it. 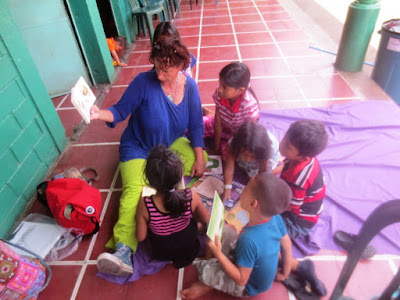 Thanks again to anyone who made this possible, volunteering or donating towards art supplies!
To be continued! 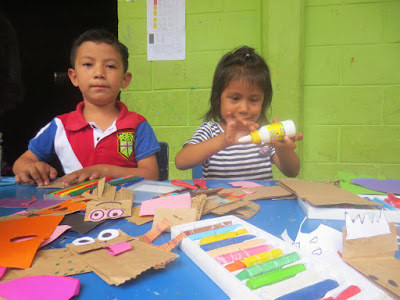