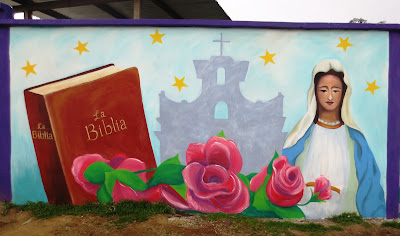 One more panel done, right in front of the church, with religion as a theme as requested by the community. Whereas the rest of the world deals with clashes between Hillary and Trump supporters; Muslims and Christians; Pokémon seekers and haters; Chimachoy is simply and evenly divided between Catholics and Evangelicals. So both had to be represented on the panel. Catholicism is no problem, of course, with its abundant symbols and imagery, but how do you depict Evangelicalism? Even their churches don’t really look like churches. So after long discussions with teachers and students, we decided on a Bible, although that can also refer to Catholicism, of course. But if anyone asks, the left side is “Evangelical”, the right is “Catholic” with the Maria from the church and in the middle the silhouette of the (yes, Catholic) church, as symbol for religion in general. Done! 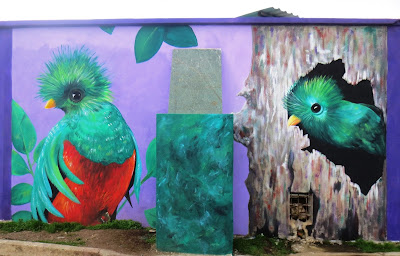 The next panel is right at the corner and holds a plaque that mentions the sponsors who helped built the elementary school. There’s not really a central park in Chimachoy, but this is the biggest open space in town where people can get together, so a good spot for some civic symbols the Central Americans are so fond of. Before I moved here, I didn’t even know that things as a “National Animal” or “National Tree” existed. In the case of Guatemala, the national flower is the Monja Blanca orchid (dutifully painted last week on the Nature Panel) and the national bird is the quetzal. But rather than painting all these symbols together, I decided to paint a pair of lifelike quetzals, bigger than life, overlooking the main area. Approved by passersby. 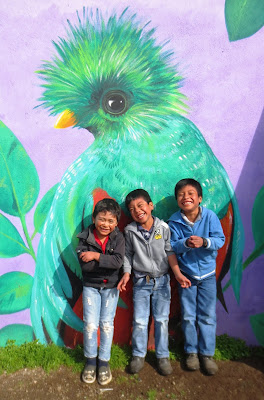 It was a rather uneventful few days despite bitter cold and an occasional rain shower. I had little help from the students because one day they were out early and the other day there was no school at all. But that was okay, tons of details I had to deal with by myself anyway and I made good process. The only interruption was by a rather insistent old man I had never seen before and that while I think I know everybody  in Chimachoy by now. Rubber boots, wasted shirt about five sizes to big and an old-fashioned transistor radio hanging around his neck. He asked me if I could give him a few gallons of paint. (No.)
Whether I’m a Christian or Evangelical.
Being a little cranky, sweating on Maria’s face that didn’t turn out the way I wanted and having heard that question a zillion times already, I answered: “Neither.”
“But you have to embrace our Saviour!”
I answered that you could embrace Christ without being Christian or Evangelical, but apparently that was the wrong answer. Old Man said he would come back to read me some verses from the Bible. Hurray.

He did come back, but this time to ask where he could buy the paints I use. I explained him while he carefully wrote down the directions in a notebook. On the East of West side of the street? House number? Sigh…

Ten minutes later he came back and told me he wanted to use the paint to make a small portrait of his grandfather, because he had learned to paint when he was in high school, a long, long time ago. I told him he didn’t need gallons of paint to make a small portrait.
Oh.
Could I paint the portrait for him? For free?
No. No and no. As much as I’m for stimulating people to appreciate the arts, after finishing this mural, I’m done with freebies in Chimachoy for now.
Well, how much would I charge?
I answered $50, ridiculously little but I knew it would be way over his head and hopefully would blow him off, leaving me in peace to paint.
It did for a little while, but soon he was back carrying a big sack.
“Do you want to buy cauliflower?”
“No thanks.”
“Why not?”
“Because I don’t like cauliflower.”
“Well that’s weird…”

After that he only came back one more time with his sack, this time asking if I could keep an eye on his cauliflower while he went on an errand. Yes, that I could do.
I guarded the cauliflower with my life but when Old Man came back, he picked up his sack and left, without even saying thank you or goodbye. And that was the last I saw of Old man, thank goodness… 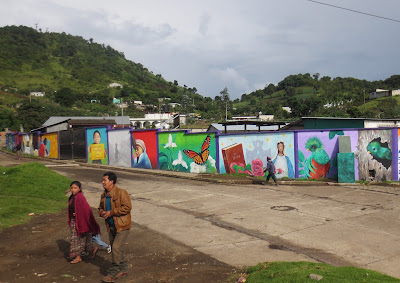 So far 17 panels are painted (out of 26), 44 meter in total, with 12 designs. A whole street long! Next week we’ll turn around the corner for the last bit. Can we do 21 meters in just two days? With tons of help from the students, I bet we can!
(And if not I’ll be begging on my knees for more donations towards transportations, so let’s hope the weather Gods will be with us…) 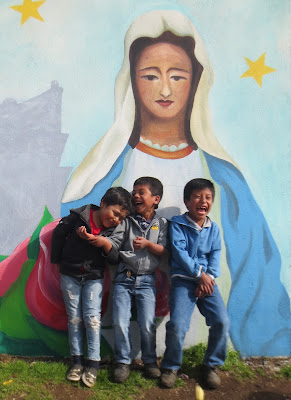