Water on a Wall

It all took a Little longer than planned, but that’s nothing new in Guatemala. What matters is that the mural is up!

We started a couple of weeks ago with a series of workshops for the members of Urban HeART (see previous post for more information on this initiative). The kids learned a bit about murals throughout the history of art which was fun and something the kids knew little about. Each participant received a copy of the manual I wrote last year on how to create a community mural from scratch. We discussed the theme and all agreed that water would be it, since the mural was going to be the backdrop for the local pila, the public washing place. Many households in this neighbourhood lack running water, so a place to do laundry (think many kids, and even more dirty clothes!) is not just a necessity, but a hub of activity.

The wall, cinderblock with many coats of paint, was in pretty good shape, but since it is in such close proximity to the audience, I decided to give it a smooth finish, in order to work in lots of details in the design. We all got together to plaster the wall, something none of us had done before. It turned out my talented assistant Henry was quite good at it. Much better than me, but it turns out anybody would be better than me at plastering.

Unfortunately, the product I tend to use (the marble dust in it results in the most delightful of smooth surfaces!) was not available. I got something else, exactly the same according to the vendor, except that it wasn’t. Not half as smooth, and worse, it doesn’t dry as fast, so the actual painting was delayed with a week. But on Monday the day was finally there…

It was quite cold when I arrived at 7.30am. With temperatures falling during the night to a chilly 12°C, a cool breeze and the sun still hiding behind the mountain range, it was a bit unpleasant, but as soon as the sun peeked over the mountains, the temperature went up quickly. I started out drawing a 1 x 1 meter grid. I had divided the design in vertical patches, which would make it easier to work with a big group, side by side. About 10.30am I was joined by Henry and 5 members of Urban HeART, plus a few kids from the neighbourhood who also wanted to help out. We made great process and wrapped up the work at 5pm, just when the sun disappeared behind the mountains in the West, immediately cooling down the valley with its absence. 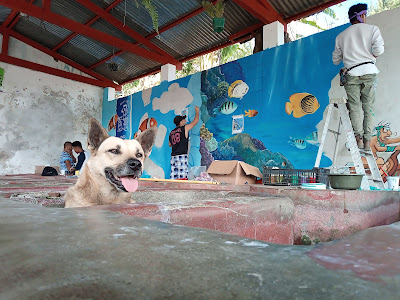 Day two started pretty much the same. The two small boys were back and couldn’t wait to get started. Would we be able to finish the mural that day? It looked like we would, but it’s always hard to tell. But we did! At 5pm we had the whole wall finished and varnished. 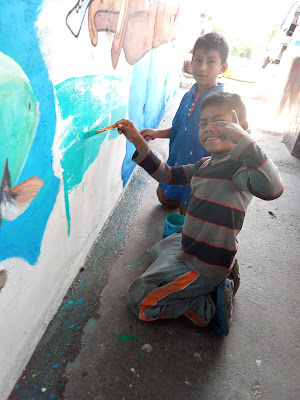 The mural depicts various appearances of water, mixing modern day problems of pollution with ocean life and ancient Maya imagery. On the left, next to the water drops, are three midwives performing a purification ritual with water, as it appears in the Maya Madrid Codex. 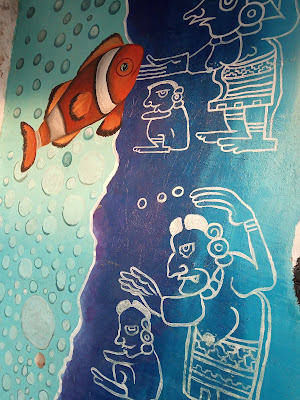 Next some coral reef as found it this part of the world. To the right, a whale, also to be spotted on the Pacific coast of Guatemala; a pelican; and a canoe with ancient Maya spiritual beings, based on a finely carved bone found at Burial 116 in Tikal. Two paddlers, the old Jaguar God who represents Night, and Stingray God (Day) manoeuvre a canoe that represents the Milky Way towards the Underworld. In the middle of the canoe sits the dead Corn God, accompanied by an iguana, howler monkey, parrot and peccary, who represent the constellations, making the whole scene a representation of the world as it tuns. 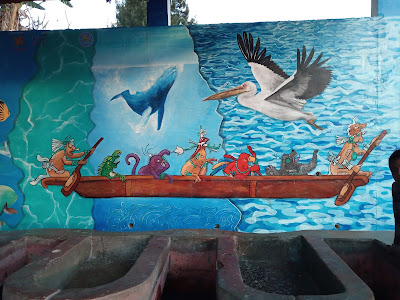 The pelican, native to Guatemala, can be seen as a symbol of freedom and eternity. 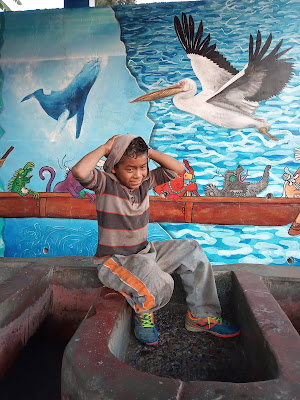 It was a wonderful experience working with the Urban HeART youth and get such positive feedback from the community. The location couldn’t be more perfect, it’s THE place where people meet, wait for tuc-tucs or gather together. It was a joy and an honour to leave this mural to the community of Vista hermosa, Jocotenango. 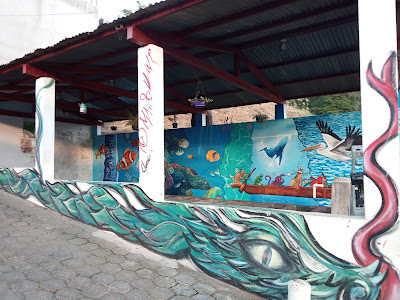 Rests me to thank all those people without whom this mural wouldn’t have been possible: the Dutch organisation Colour4Kids and the people behind it, Erik, Jos and Hassan: thanks for sponsoring this project. Thanks to all of Urban Heart’s members who participated in the project, especially Denilson Larios and Katie Pokorny for setting it all up. Many thanks to Henry Calel for always being there and to Catherine for lending equipment and transportation. ¡Mil gracias! 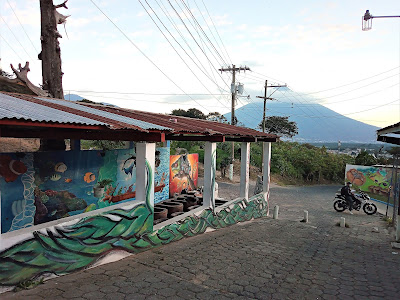