Dogs at the Lake

Funny how dogs make my world go round. Besides many fantastic pooches I’ve met some truly amazing people through my dog connections. Dogs also have become an important subject matter in the art I create. So it isn’t much of a coincidence that I ended up painting two big dogs in Panajachel, Guatemala.

You see, Selaine d´Ambrosi, director of AYUDA, an NGO that provides spay and neuter clinics around Lake Atitlan, posted a picture of a pretty dog mural on Facebook and commented she’d like to see something like that in Panajachel. That resulted immediately in a message from Dr. Jim Bader,a common friend and US veterinarian who has been coming down to Guatemala for years, providing free surgeries as well as many supplies for Unidos para los Animales, the NGO I volunteer for. He told Selaine he knows an artist (that’s me!) and that he was willing to sponsor the mural. 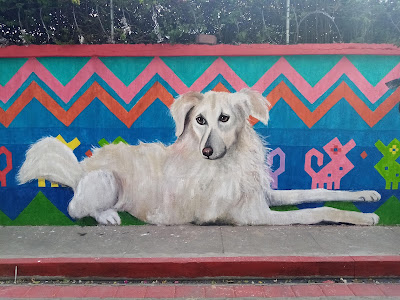 So here we are! Selaine found us a wall in the centre of Panajachel, owned by a family of dog lovers. On their request, I painted Chispita, one of their most beloved pets. She passed the rainbow bridge already, but is still in their hearts and now forever on their wall. The second dog was also a request, by Selaine. It depicts Tripod, the first street dog she picked up about thirteen years ago when she moved to Panajachel. He was hit by a car and his left front leg needed to be amputated. But that didn’t stop him. Tripod became an icon in Panajachel and was mostly found in the Palapa bar where he’d sing along with the musicians and let himself be treated as a king. 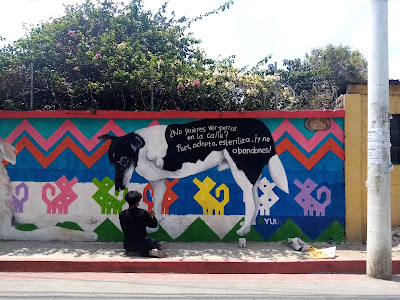 Selaine thought he deserved better than that and found him a real home. But despite all the cuddles in the world and the best food a dog can dream of, Tripod found an escape route and made his way back to La Palapa. This happened several times, so in the end she decided that would be the best place for him to be. It definitely was in his opinion.

Unfortunately, Tripod was killed by a car or tuc-tuc, from what I heard intentionally. (May the driver rot in hell.) 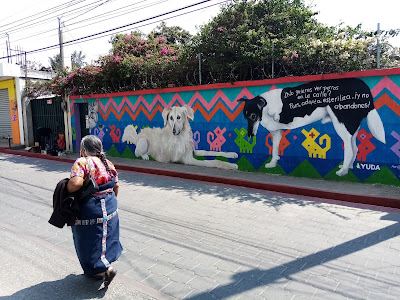 So off we set for Pana, my assistant Heny Calel and I, all prepared for working long hours in the sun. It is dry season after all, the mountains now yellow, the air suffocatingly hot and dry. We were quite surprised when the first day started with quite heavy rain. It did stay pretty dry the rest of the day, but it was uncharacteristically cold. But we made good progress. And day two made up for the previous one in hours of sun and temperature. But since the mural is facing north, we were mostly working in the shade. The eleven-meter-long wall is only two meters high, so we didn’t even need a stool to stand on. The surface was quite rough, it was like painting on corrugated (cement) carboard which made painting details a bit difficult. There was lots of traffic passing by, which is good of course, giving the work lots of exposure. All in al it was a fun job to do and we got great response. Many people recognised Tripod. Others reacted very positively to the message of the mural: So you don’t want to see dogs on the street? Well then: adopt, sterilize and don’t abandon! (I phrased it in a way it works both for people who hate to see dogs on the street because they love them, as well for those who hate them.) 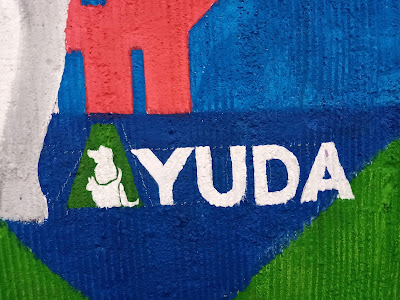 With the work done, Henry and I treated ourselves to a little excursion to San Juan la Laguna, a village across the lake famous for its murals. Nice to admire other people’s work for a change!

This mural is truly a community effort of dog-loving people! Thank you Selaine d’Ambrosi of AYUDA for initiating this project and all the great work you do with AYUDA. Thanks also to Maggie and family who provided the wall as well as drinks and snacks for us painters. Many, many thanks to Dr. Jim Bader of Mapleview AnimalHospital and Headin’ Home Pet Rescue Inc. for all you do for animals both here and there, and of course for sponsoring this mural. You are the best! Also thanks to Regine Herzog for putting me up; to Gerson Ordoñez for being our trustworthy designated driver and of course to Henry Calel, my super assistant. Feeling tired but content and infinitely grateful! 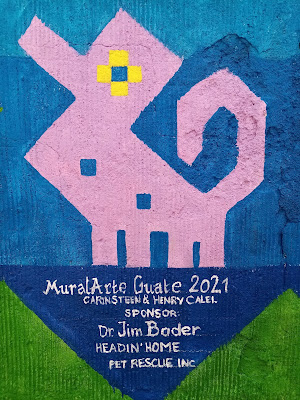