A New Mural in the Old Capital 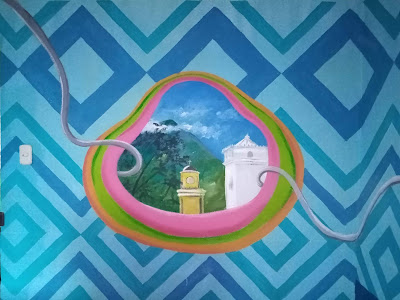 Driving through Ciudad Vieja, the former capital of Guatemala, is hardly eventful. Besides a glimpse of the brilliantly whitewashed cathedral with the Agua volcano as a backdrop, the town is unremarkable and mostly full of traffic. Even in the midst of a pandemic, without the regular flock of chicken busses and only alternating plates allowed to circulate, traffic is overwhelming and crossing the road is not for the feint of heart.
The streets are narrow, with one-story homes and businesses on both sides, leaving little space for pedestrians. Whereas the architecture is mostly typical colonial, the paint is too drab, the walls too covered with fading ads, the air too polluted for the town to be considered beautiful.

How different it must have been in its heyday! It wasn't called Ciudad Vieja (Old City) then, and it wasn't the country's first capital either. That one was named Guatemala, which means 'Forested Land' in Nahuatl, the language of the Spanish's allies who came from what is now Mexico. This Maya Kakchiquel settlement, Iximché, the second most important city in the Guatemalan highlands, was declared capital in 1524. It didn't last long. The Kaqchikel were initially allies but soon started to rebel against the Spanish conquistadors. They deserted the city which two yers later was burned down by the Spanish. They packed their bags, saddled up and founded a new capital on the south-west slope of the Agua volcano in 1527, July 25th, feast day of Saint James for which the town was called Santiago de los Caballeros.

The big boss in town was Pedro Alvarado, but he was off fighting the indigenous further up north in what is now Mexico. It didn't go too well and while dying on the battlefield, he bequeathed his wealth and right to rule to his wife, the Spanish noblewoman Beatriz de la Cueva (not his first wife, he was previously wedded to Beatriz's sister Francisca, until she died). Beatriz received notice on August 28th and was besides herself with grief. She immediately ordered the walls of the beautiful palace, overlooking the town, to be painted black, both inside and out. But she wasn't so out of it that she forgot about her responsibilities. Actually, her brother Francisco had been put in charge during her husband's absence and it was only logical that he would continue with his duties. But no, Beatriz summoned him and the rest of the city's upper crust and declared that she would take over from that moment on. On September 9th, she signed the paperwork that put her in power as “la sin ventura”, the unfortunate one, because of her recent loss. Little did she know there was much more to lose...

Because... there was a plot against her.
The royal treasurer and his supporters had been planning a coup for the early morning of September 11th. But Beatriz, now the first female governor in the New World, found out about it and sent her brother Lieutenant Francisco, in charge of day-to-day matters, to arrest the men. They hid in an abandoned house and avoided arrest.
Now, history might have taken a turn right then and there if it weren't for a combination of unfortunate natural disasters. There are conflicted theories of what really happened, but most versions contain one or more of the following phenomena: a strong earthquake; the wall of a volcanic lake collapsing causing a flood; extensive rain; mudslides; lahar.

Beatriz heard the rumble, grabbed her little daughter by the arm and ran for shelter in the chapel. Unfortunately, the roof of the chapel collapsed and crushed her to death. And that was the end of it, both for the first female governor and for the second capital of Guatemala. (Some have used this story to illustrate the fact that women should not enter politics, but that is, of course, utter nonsense.)

The town was completely destroyed. But two years later, we're in 1543 now, a new capital arose in the nearby Panchoy valley, carrying the same name of Santiago de los Caballeros, now known as Antigua (as in “Ancient Guatemala” versus “Guatemala”, the current capital).
The town suffered major earthquakes in 1565, 1575, 1577, 1585, 1717 and 1751. But the one in 1773, that destroyed major parts of town, was the last straw and lead to the decision to move the capital once and for all to its current location.

And to make a really long story short, it has absolutely NOTHING to do with what this post is about: a new mural, in Ciudad Vieja!

The Corona virus has affected my mural plans quite a bit. I was just about to start painting with a group of adolescents in Alotenango, after a week of preparatory workshops, when the schools were closed and the state of emergency announced on March 16. It is very unlikely we'll be able to continue the project this year, so I was looking for other opportunities.

About two years ago, one of my neighbours in Antigua asked me if I could paint a mural at the school she worked for in Ciudad Vieja. I promised I'd keep it in mind, but nothing ever came of it.

While discussing the future of the Alotenango project with the kids' teacher, he told me that his wife is director of a small school and she very much would like a mural. Turns out it was the same school in Ciudad Vieja, so it felt like it was meant to be.
Of course normally we would involve the kids in the project, but with the schools closed, there was no way. Logistically there were some challenges (no public transportation, alternating circulation of cars etc.) as well as our safety to think about. But in the end it turned out to be a perfect project under these circumstances. 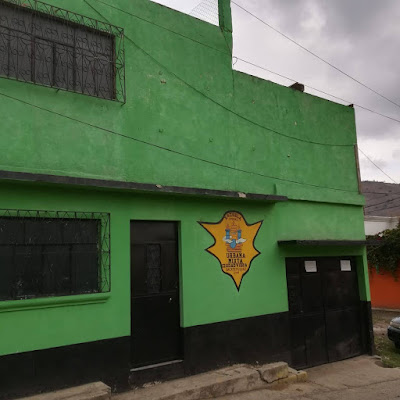 The school is located in one of those buzzling, narrow side streets of Ciudad Vieja, this part of town well known for its woodworkers and coffin manufacturers. The school was founded in 2009 by a group of teachers who wanted to offer quality education to children from nearby rural communities whose parents had come to Ciudad Vieja to look for work or because they had lost their homes. These children come from difficult and very poor backgrounds, quite often behind in their academic skills. The school currently caters to 58 elementary students and 12 kids in kindergarten. 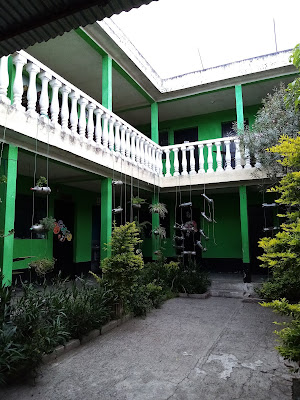 Soon, the school will have its own digital library. The teahers already made space for it, but it just looked like a dump. And that's were MuralArte Guate came in. I decided on a background of monochrome colours, in the same colour scheme as the logo of the project that is called Monocramía. It now looks a bit like Guatemalan typical fabric. On it are several dots or holes with scenes representing various elements of life: outer space, jungle, kids with books, the ocean and a scenic view of Ciudad Vieja with its cathedral and volcano in the background. There's also a laptop representing modern technology and a cable connecting all these elements.
It was so nice to be painting a mural again, together with my fabulous assistant Henry Calel. Such a pity we couldn't involve kids in the process, but we hope they'll enjoy their new library a lot. 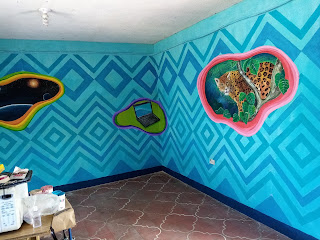 This mural was made possible thanks to a legacy of the Eben Haëzer Church in Klazienaveen in Holland. 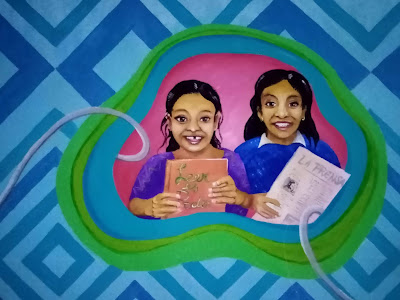 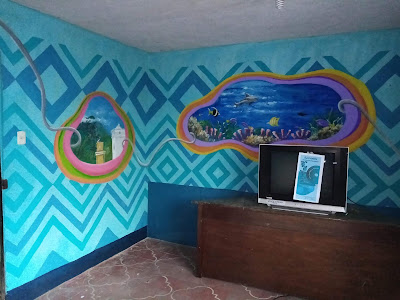 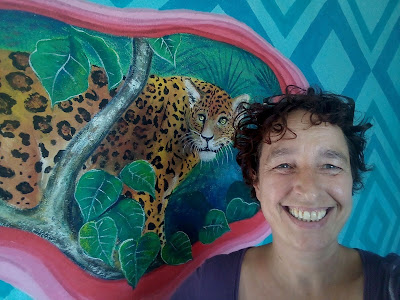