A Christmas Gift for the Elderly

Only a block away from the central park in Antigua Guatemala, an old colonial building is home to 136 elderly (50 women and 86 men) who have nowhere else to go. The high ceilinged bedrooms off the corridors are cramped with beds and few personal belongings. Mealtimes are the highlights of the day. Otherwise, most of the elderly spend the day in the corridors surrounding a garden, dozing off while wandering far off places in their minds, singing to invisible audiences or strolling the corridors on their Crocs. Some look more ancient than Yoda and have long lost interest in life beyond the walls of the home, but many others are active and alert, happy with any diversion offered by visitors or volunteers. Or mural painters.

In the beginning of November I already painted a mural in the physiotherapy room at the nursing home Fray Rodrigo de la Cruz. It was much appreciated and immediately resulted in a request for another mural in the dining hall. Of course I said yes!
After some fundraising I started working on the design. I decided on a double portrait of two elderly people surrounded by objects from their youth. Surfing the internet for suitable images, I stumbled on a post by Mikki Branner, who volunteered at the nursing home in 2012. It’s a beautiful post with striking portraits of some of the residents (and hereby my excuses for using those images without permission, but I couldn’t find a way to contact Mikki Branner). I picked two portraits of, as I learned later, Don Inocencio and Doña Juanita, both now deceased. Don Inocencio, as I was told, loved his liquor and although prohibited in the home, he managed to smuggle some in sometimes and then happily sang for his fellow residents. Doña Juanita passed away only to months ago. She was mute but had no problem expressing herself and was much loved in the home. 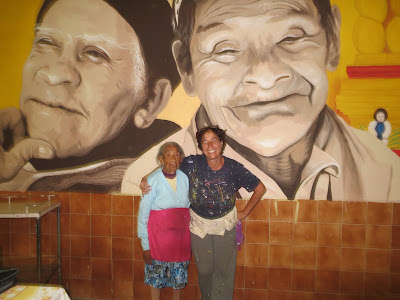 I asked my 16-year old assistant Henry to help me find images of antique objects. He was eager to help and soon sent me a series of images of “old stuff”. His pictures cracked me up: film posters of Rocky, Superman and Ghost Busters. A View Master and a Rubik Kube. Plastic soldiers and a skipping rope! That’s what you get when you ask a 16-year old for pictures of “old stuff”. It also made me feel very old.
I found some pictures of antiquities myself but when assembling them around the portraits, I wasn’t very happy about it. It was too chaotic, it lacked unity. I tried some Guatemala fabric in the back ground, but that didn’t work either. Then I remembered the colourful church of San Andrés Xecul and… yes! 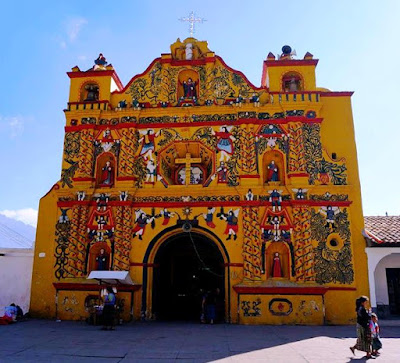 This 17th Century church (near Quetzaltenango) is a wonderful example of the syncretism between Maya beliefs and Catholicism. The parish was without a priest for years and the locals just did their thing, I guess. The façade is covered with angels, saints, flowers, vines, ferns, palm leaves and many animals, including a few jaguars. The angels look like tired, chubby super heroes and the symmetry is quite off here and there. I just love it! 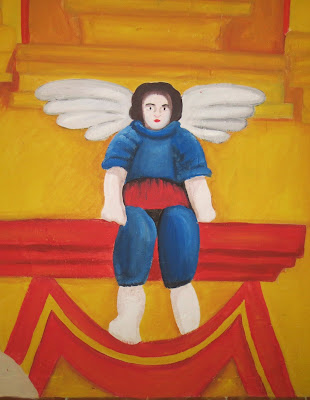 So off we went to paint. This time there was a lot more interaction with the residents and they loved to have us there. One man whose designated seat is right in front of the mural told me he liked this one much better than the other because he had physiotherapy only once a week and this one he could enjoy every day.
Within days we knew many of the residents and every morning we had to personally greet them. Some liked painting themselves and showed me their work, wanting to hear my “professional opinion”. And of course, a week before Christmas, we were constantly treated to Christmas Carols, (indoor) processions, (outdoor) fireworks, concerts and many, many treats the elderly insisted on sharing with us. 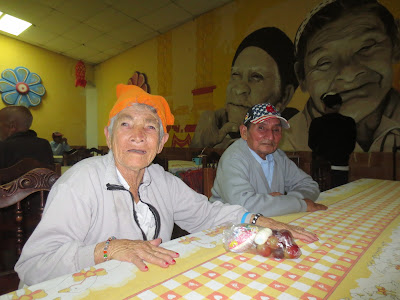 Henry and I both felt that our work was thoroughly appreciated both by the residents and staff. About every able resident stopped to chat with us and congratulate us on the art work. Other people were less aware. One time, working high on the ladder, an old man urgently beckoned me to come down. I thought he might have some suggestion for the mural, but no, he just wanted some water. All in all it was a very special and heartwarming experience. We left after many hugs, handshakes and applause. And guess what? They want ANOTHER MURAL!!! Fine with me, there’s still plenty of wall left… 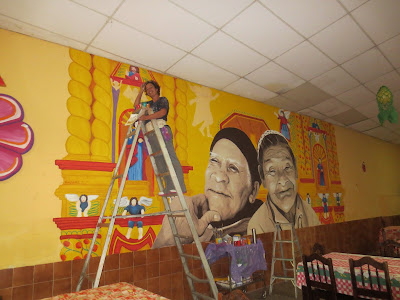 Many, many thanks to Henry Navarijo who again was a great help and is a very talented young painter. And of course to the sponsors who made this mural a reality: Wendy Russell, Nina Larrea, Linda Green, Jim Bader, Jihae Park and Romi Gonzalez. Thanks so much!!!

And as for another mural?? I can squeeze one in before the end of the year. Want to help? Please donate and I’ll paint! 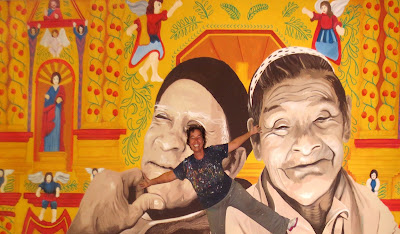 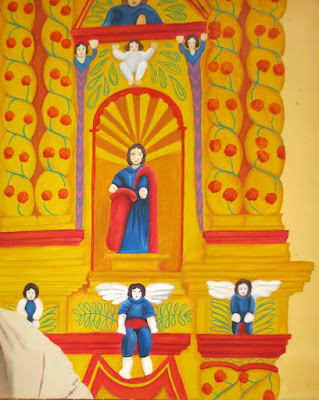 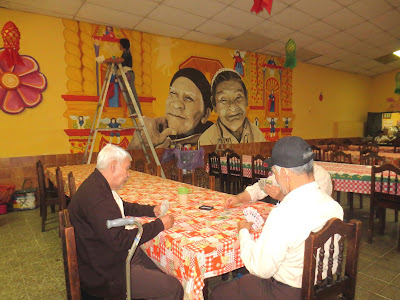