Behind the Scenes: Painting Kittens and Lots of Lines 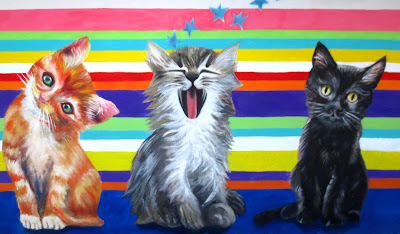 Note to self: No more designs with lines on the background! I knew it was going to be a pain in the butt because I’ve done it before, so what was I thinking…. It looks cute, yes, and it’s a good way to paint a partial wall, but on this particular surface with its crumbly texture each line took me almost an hour to finish and there are 15 of those, so that’s a lot of line painting. (And no, masking tape was no option.) They turned out not even that straight! (The walls fault of course, not my painting abilities!).
And after painting many a dog, I didn’t think that four kittens would be a big deal, but they took me much longer than expected. Why? I guess because they are much smaller (just a little taller than my friend Judy) than the figures I usually paint, because of the space’s requirements. The mural is located in a corridor where people pass right by. There is no space to step back and take the painting in as a whole, so too big a design won’t work. Typically a restricted space requires smaller and more detailed images that take longer to paint. That answers the frequently asked question why I generally charge more for a “regular” painting to be framed and hung in the living room than a much bigger mural.

I must admit I’m so naive to think that after having painted dozens of murals I’ll never get surprised, but of course I’m proven wrong each and every time (and I guess that’s one of the reasons I like creating murals so much). This time I thought it would be an easy one, done in two days, not even needing a ladder, but it didn’t work out that way. Not just because of the lines and details but also because it wasn’t easy working with the adorable Kittens (the human variety that occupy the classroom) running around or hanging from my neck, as adorable and inspiring as they are. I even learned to say “cat” in sign language” (Thanks Abner!) and the adorable Melanie was happy to see me back the second day, telling me grammatically incorrectly but very poetically: I saw you tomorrow!

Anyway, mission accomplished, the Gatitos are happy with there kittens on the wall and that’s what matters most. Ready for the next one! The Universe is on our wish list, we only need to find a sponsor and we’re ready to continue! (We only need another $250!)

Thanks a million to my good friends Suzanne and Cita van der Linden who never ever forget about these whereabouts and are always willing to help, this time generously sponsoring the kittens’ mural. Also thanks the staff of Brillo de Sol and of course those kittens in kindergarten. 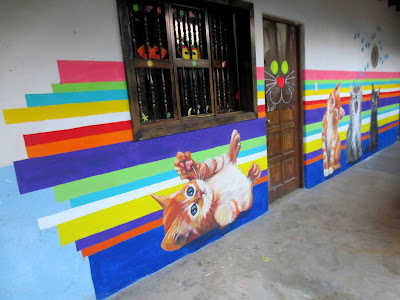